Patreon Bans Users for Content on Other Platforms Without Warning

'At the end of the day, they want you dead and gone,' one recently banned content creator told Timcast

This week, Patreon, which hosts paid content for creators, has banned two well-known creators from its platform for appearances and content shared on other media platforms.

On Tuesday, Sydney Watson, host of “You Are Here” on BlazeTV, was banned from the platform. Watson does not regularly post content to the site, but was banned over “hate speech,” according to a notice from Patreon.

Watson’s program on BlazeTV covers current topics, such as the Disney Employee walkout over Florida’s Parental Rights Bill that occurred on Tuesday.

On Wednesday, the platform offered a jarring statement in reply to Watson’s appeal. A representative named Blaire, who stated she is with the Trust and Safety team at Patreon, said, “We take into consideration the content on Patreon as well as any activity taking place outside the platform.”

Asked Patreon why they decided to ban me. They didn't answer.

They note here they take into consideration everything you do outside their platform. This is batshit.

This platform can hold your money hostage if they don't agree with what you do everywhere else. Insanity. pic.twitter.com/dYEqKlAl4c

Watson was notified that there would be no further consideration of reinstating her account, and the decision was final.

Watson is not the only user banned from Patreon this week.

Josh Lekach was also banned from the platform on Tuesday. Lekach hosts a regular show on Patreon called “Wrong Opinion,” in which he discusses current events and cultural issues around the nation.

His removal came only hours after appearing on Alex Jones’ “Info Wars.”

During the appearance, Lekach discussed the issues of gender, education, the events of Jan.6, and Critical Race Theory.

At the time he was banned, Lekach had more than 725 subscribers on Patreon, which generated about $4,000 per month in income.

PATREON JUST BANNED ME HOURS AFTER APPEARING ON INFO WARS.

I’VE NEVER RECIEVED ANY WARNINGS FROM THEM.

In a statement to Lekach, Blaire from Patreon said the platform welcomes “impassioned debate and diverse viewpoints,” but does not allow “negative stereotypes or segregational content towards a protected community.”

“I’m not shocked about the ban, but that doesn’t take away from the fact that these are heartless evil people messing with small creators’ livelihoods,” Lekach said in a statement to Timcast. “They like to think of themselves as the protectors of ‘protected classes,’ but that doesn’t negate the fact that at the end of the day, they want you dead and gone. They’ve messed with not only me but my wife and baby. This isn’t over. This is war.”

Multiple platforms continue to enforce censorship and have a record of silencing conservative-leaning opinions. Since 2018, the trend has been the focus of Congressional review hearings.

Editor’s Note: This article previously said that the practice of banning creators for activities outside the platform began this week — but it has been going on for some time.

In 2020, Patreon was sued by fans of comedian Owen Benjamin for banning him from the platform under similar claims.

A California judge sided with Benjamin and his fans, ruling that Patreon “changed the rules in the middle of the game”

Political commentators Lauren Southern, Milo Yiannopolous, and many others have been banned under the same premise. 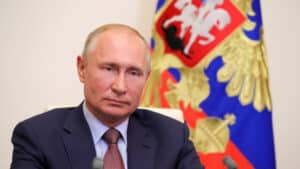 Putin to Make ‘Unfriendly Countries’ Pay For Gas in Rubles