“He offered me a condo and a Porsche to be his ‘Number 1 girl,'” Anderson said of the Rocky actor in her Netflix documentary Pamela: A Love Story which premieres later this month.

“And I was like ‘Does that mean there’s Number 2?”

Stallone reportedly said his offer was “as good as Tinseltown gold,” Anderson claimed per the New York Post.

Pam Anderson says Sly Stallone offered her a condo, Porsche to be his ‘No. 1 girl’ https://t.co/MiR8YAhB6C #SmartNews

“I wanted to be in love,” she said. “I didn’t want anything less than that.”

“The statement from Pamela Anderson attributed to my client is false and fabricated,” said a representative for the Oscar-nominated actor. “Mr. Stallone confirms that he never made any portion of that statement.”

The Baywatch star also divulges information surrounding her past marriage to Motley Crüe drummer Tommy Lee and criticizes Hulu’s Pam & Tommy series released in 2022 detailing the leak of her 1995 sex tape with Lee.

“On the first day of filming, I walked out of my dressing room, and Tim was in the hallway in his robe. He opened his robe and flashed me quickly — completely naked underneath,” Anderson writes in her upcoming memoir Love, Pamela obtained by the outlet. “He said it was only fair, because he had seen me naked. Now we’re even. I laughed uncomfortably.”

Allen’s alleged comment was in reference to Anderson’s modeling in Playboy.

“No, it never happened. I would never do such a thing,” Allen told the outlet denying Anderson’s claim. 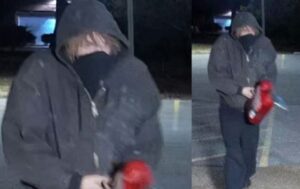 Illinois Man Charged with Setting Fire to Planned Parenthood, Says He Was Upset About Ex-Girlfriend Who Had an Abortion Years Earlier