More than 60 tons of ground beef that may have been contaminated with E.coli have been recalled by the United States Department of Agriculture.

Lakeside Refrigerated Services found an issue with the meat through routine testing of imported products conducted between Feb. 1 to April 8. Products from the New Jersey company with the established number “EST.46841” inside the USDA inspection mark are not subject to a nationwide recall.

The detected strain of E. coli, known as Shiga toxin-producing E. coli (STEC) 0103, is difficult to identify and can cause diarrhea and vomiting.

“Most people recover within a week, but, rarely, some develop a more severe infection,” the USDA said in its announcement on April 25. “Hemolytic uremic syndrome (HUS), a type of kidney failure, is uncommon with STEC O103 infection. HUS can occur in people of any age but is most common in children under 5 years old, older adults and persons with weakened immune systems. It is marked by easy bruising, pallor and decreased urine output. Persons who experience these symptoms should seek emergency medical care immediately.”

The Food Safety Inspection Service, part of the USDA, warned consumers not to consume the product and to dispose of them or return them to the place of sale.

In total, an estimated 120,872 pounds of ground beef are believed to be contaminated. A list of the 40 contaminated products is available online. Impacted brands include Thomas Farms, Nature’s Reserve and Marketside Butcher.

The largest recorded ground beef recall in American history occurred in February of 2008 when an undercover investigation by the Humane Society revealed Westland/Hallmark Meat Packing Company, a California business, had been using sick or injured animals that would not walk.

The recall included products sold as far back as February 2006, much of which had been sold to public schools.

More than 143 million pounds of beef were recalled because the USDA said there was a “remote probability” that the products could cause illness in humans. No illnesses were reported at the time of the recall.

This is also the second outbreak of E. coli reported by a federal agency in recent months. The Center for Disease Control and Prevention announced in March that 10 cases of illness and one death had been recorded in connection to a strain of E. coli detected in package salad.

No illnesses have been reported at this time in connection to the Lakeside Refrigerated Services beef. 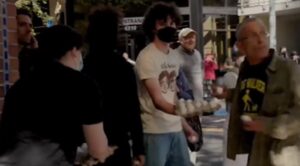