Oregon Gov. Pardons 47,000 Marijuana Convictions, But No One Will Be Released From Prison

Oregon Gov. Kate Brown has granted a pardon for prior offenses of simple possession of marijuana, an executive action that will affect 45,000 state residents, as well as forgive more than $14,000,000 in fines and fees.

“The pardon will remove 47,144 convictions for possession of a small amount of marijuana from individual records, eliminating barriers for thousands of people seeking employment, housing, and educational opportunities who have otherwise been ineligible,” according to a statement from the Governor’s Office.

No one deserves to be saddled with the impacts of a simple possession of marijuana conviction—a crime that is no longer on the books in Oregon. I am pardoning these prior Oregon offenses, an act that will impact an estimated 45,000 individuals. https://t.co/mT9bcYzCcV

Brown’s pardon covers electronically available Oregon convictions for possession of one ounce or less of marijuana, in cases prior to 2016, where the person was at least 21 years of age, and for whom possession was the only charge. Offenders convicted of crimes with victims are not eligible for pardons under this order.

However, according to a fact sheet provided by Brown’s office, her pardon will not result in a single person being released from incarceration because “no one is currently incarcerated in the state of Oregon solely for the possession of one ounce or less of marijuana.”

Brown’s pardon comes less than two months after President Joe Biden issued a proclamation pardoning federal offenders convicted of only simple possession of marijuana, which activists, interest groups, and pundits quickly noted would free no one from federal prison because no one is jailed federally for “only” simple possession.

Biden pardoning small possession marijuana convictions because it'll "help people of color" yet no one is in federal jail for this is a perfect example of how Democrats have been treating us politically.

More symbolism politics that do nothing while pretending to help people.

The pardoned marijuana conviction will not show up on non-governmental background checks, but may still be available on background checks conducted by law enforcement officers and licensing authorities.

“No one deserves to be forever saddled with the impacts of a conviction for simple possession of marijuana — a crime that is no longer on the books in Oregon,” Brown said.

“We are a state, and a nation, of second chances. Today, I am taking steps to right the wrongs of a flawed, inequitable, and outdated criminal justice system in Oregon when it comes to personal marijuana possession,” she added. “For the estimated 45,000 individuals who are receiving a pardon for prior state convictions of marijuana possession, this action will help relieve the collateral consequences arising from these convictions.” 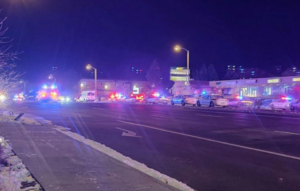