OPINION: The TikTok Threat Might Be Worse Than You Thought

Who is actually comfortable with the administration making a deal with a company that is an expert in gathering unauthorized information on so many U.S. citizens?

Alabama Governor Kay Ivey recently noted in a statement: “Disturbingly, TikTok harvests vast amounts of data, much of which has no legitimate connection to the app’s supposed purpose of video sharing. Use of TikTok involving state IT infrastructure thus creates an unacceptable vulnerability to Chinese infiltration operations.” In August of last year, it was reported by Reuters that the Chinese government officially acquired a stake in TikTok’s parent company ByteDance. Even before the stake was officially acquired, a ByteDance whistleblower writing on the website Protocol, alleged that TikTok has been used to “suppress minorities, censor freedom of speech and mask human rights violations” on behalf of the Chinese government.

On Dec. 6, 2022, The Wall Street Journal reported that the Biden Administration’s impending deal with ByteDance, the CCP-controlled parent company of TikTok, faces further delays. Such a deal, and the talks surrounding a deal, “have been aimed at reducing Chinese government influence on the U.S. operation without completely severing TikTok’s Chinese ties, according to people familiar with the discussions.” The failure of the current administration to accurately assess long-term challenges posed by foreign adversaries stands out as yet another shortcoming of U.S. executive leadership today.

Over a dozen states have also taken action against TikTok by banning the app from state government devices. In addition, Indiana’s Attorney General Todd Rokita has sued TikTok, describing it as “a clear and present danger to Hoosiers that is hiding in plain sight in their own pockets.” A contingent of Wisconsin Republican members of Congress has asked the Badger State’s Governor, Tony Evers, to enact a similar ban. One of the participating lawmakers, Congressman Gallagher, has described TikTok as “digital fentanyl,” referencing the numerous negative impacts of the app of Americans.

Mark Weinstein, founder of social networking service MeWe, has urged American authorities to ban TikTok immediately. In an op-ed piece for Newsweek, Weinstein indicates that TikTok is collecting personal information and biometric data on between 30 and 40 million children in the U.S. He also cites the recent 60 Minutes report which contrasts the American version of TikTok and the Chinese version of the app known as Douyin. Douyin promotes science and engineering and limits young users to 40 minutes a day. Conversely, Weinstein states: “Meanwhile, in the West, TikTok’s trending videos are vapid, superficial, and often blatantly sexual.”

The MeWe founder cites everyone from current FBI Director Chris Wray, who considers TikTok’s data collection and recommendation algorithm to be a mechanism to influence Americans, to USA Today‘s reporting on the policies of the previous administration, which sought to compel ByteDance to sell its U.S. assets. The anti-TikTok push was reversed by the Biden administration, which is instead seeking to negotiate a deal with the app’s parent company. Such a deal would seek to prevent American TikTok users’ data from leaks to the Chinese government, Bloomberg reports: “A plan would be expected to build on an arrangement announced by TikTok in June under which US user traffic is routed through servers maintained by Oracle Corp.” Much like with past foreign policy failures, such as the 2021 withdrawal from Afghanistan, the current administration appears to be sorely miscalculating the necessary steps to counter hostile foreign adversaries.

They’re looking through all of my contacts to see whether those people are on TikTok, but who knows what they’re doing with it. … They’re definitely keeping track of everything that’s in there, whether those people are on TikTok or not. And the interesting thing there is my friends didn’t consent to having their phone numbers and emails uploaded in TikTok.

Americans seeking to defend themselves from TikTok’s data collection and negative mental health impacts along with other effects have their work cut out for them. Simply quitting the service won’t be enough: TikTok has used tracking pixels to collect data on Internet users. In addition, mental health and development issues aren’t problems that can be solved by simply turning an app off. These challenges are going to affect a massive number of people: it has been estimated that TikTok has more than 1 billion users worldwide. A generous proportion of those TikTok users happen to be young Americans. Twenty-six percent of young Americans get their news from the Chinese app, according to Pew Research.

Data collection by a hostile foreign power such as Communist China is bad enough by itself. Yet TikTok’s impact manages to be even more nefarious – damaging young Americans during vulnerable stages of their development.

An August 2022 Pew Research Center report ranks TikTok as the second most used social media platform among teens after YouTube, with 67 percent of teens using the Chinese Communist Party-linked app. A Forbes article reported that in 2021, TikTok was the most visited website in the world. The rise of highly-lucrative influencer marketing that uses TikTok essentially legitimizes the CCP-linked app. One might surmise that U.S.-based TikTok digital marketing represents another “growth industry” offering wealth to American society.

Not so fast. Scientific researchers have illustrated the extent to which TikTok use has adversely affected the brain – particularly young brains that haven’t finished their development. TikTok has been linked to shortened attention spans, particularly in young people. Pediatrician Dr. John Hutton has described TikTok as a “dopamine machine.”

In addition, psychologist Dr. Jean Twenge has stated that TikTok and the trend of teens self-diagnosing with mental disorders as “clearly a modern version of social contagion, which has always been more prevalent among teen girls than other demographic groups.” Dr. Twenge has recommended that parents keep their children off social media until they turn 16.

In addition, clinical mental health counselor Dr. David Barnhart is quoted as stating about the impact of TikTok – and smartphone usage in general – on mental health: “We have become so integrated with our phones, which has a lot of positive aspects but it’s like we are walking around with a computer terminal, constantly…All of that stuff exacerbates our stress.”

Bernice Ye, a comedian who created – and then deleted – a popular TikTok comedy account, voiced concern about not only TikTok’s data collection, but also its role in stifling creativity.  The app’s reliance on algorithms encourages content creators, once they “go viral” and become successful on the platform, to essentially produce more of the same. Conformity has long been a hobgoblin of creative industries, ranging from music to film to television to today’s video influencers – and rather than provide a whole new avenue for innovation and success, it appears as though the fast-growing app is encouraging a churn of same old, same old.

In decades past, American leaders would have treated a phenomenon like TikTok as a security threat and banned it. In the 1950s, the U.S. State Department issued rules restricting Soviets traveling in the United States from visiting, sketching, or photographing certain locations and objects. While these restrictions have been portrayed as an excess of the Red Scare, the stark contrast between the U.S. government’s stringent control on Soviet exposure compared with today’s permissiveness towards the CCP-controlled China stands out.

CBS News has reported that TikTok’s links to China will be a topic of upcoming U.S. House hearings once Republicans take control of the chamber in January. The American government should heed the advice of cybersecurity experts like Mark Weinstein and ban TikTok as quickly as possible. The Biden administration has made their disdain for Americans’ right to free speech abundantly clear as illustrated with the Disinformation Governance Board debacle. Who is actually comfortable with the administration making a deal with a company that is an expert in gathering unauthorized information on so many U.S. citizens? 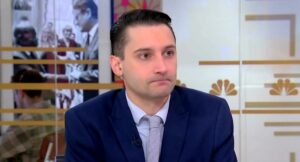