OPINION: The Property Rights of Slavery and Abortion

If you’re pro-abortion after viability and ever wondered if you would have been an abolitionist, I have some bad news for you

At the core of the abortion debate, we often hear references to slavery, pitting the woman as the victim of an invisible enemy trying to “control” her: “My body my choice!” she exclaims! “Hands off my vagina!” And so on and so forth. The goal in this latest movement is abortion to 40 weeks, no exceptions. We know this to be the truth, the reason, and the goal because the press secretary announced it on behalf of the president of the United States just last week.

REPORTER: “Does [Biden] support any limits on abortion?”

REPORTER: “Does the president support abortion until the moment of birth?”

The left believes in limitless abortion because they were told Roe demanded it, but even Roe has a viability threshold. So, if at some point — even by the standards of Roe — women “are not alone in their personhood,” as Justice Blackmun, author of Roe opinion, wrote, how does that relate to their own personal property rights? Well, the crux of this matter is ownership — but in more of a, let’s say, confederate view of property.

So according to Roe, abortion can be limited by states at viability.

“As we have intimated above, it is reasonable and appropriate for a State to decide that at some point in time… potential human life, becomes significantly involved. The woman’s privacy is no longer sole and any right of privacy she possesses must be measured accordingly.”

And also according to Roe, the 14th’s Right to Privacy clause is not absolute regarding pregnancy:

“Although the results are divided most of these courts have agreed that the right of privacy, however based, is broad enough to cover the abortion decision; that the right, nonetheless, is not absolute and is subject to some limitations; and that at some point the state interests as to protection of health, medical standards, and prenatal life, become dominant. We agree with this approach.”

Roe had limited abortion in the first trimester, but thanks to Planned Parenthood v. Casey, that part of Roe was overturned. So states can already do whatever they want barring absolute bans of the practice. Emotional arguments aside, this is an extreme, unpopular, and highly unlikely outcome no matter how many legislators cosponsor the bill.

In terms of property rights, historically, people in some states rejected the idea that they did not have ownership over another human, even when the laws in other states said, “Yes, this person is a human here.”

When they believed a separate human belonged to them, that this separate human was less than human, and that they could do with that human as they pleased — by no hyperbole, that was slavery.

The slave is a slave because his body is owned by someone else, and that owner is not the rightful owner.

By striking Roe and Casey, the power is officially returned to the states. Some states May try to ban the practice (Louisiana) and others may let you walk into a clinic at 40 weeks and say “nah.” (Colorado). However, you’ll likely end up with a small number of two extremes and a majority of normal legislatures in the middle. A woman will still have options regardless: take birth control, mix and match condoms with IUDs, track her cycle, get the morning after pill just in case, or only have sex with people with whom she wants babies. Birth control is not part of Roe. While the woman would have personal responsibility and accountability in her choices, some states would hold her to higher standards, and others to no standards. It will be her body and her choice in a state that reflects exactly what that means to her.

And that’s the thing about giving the power back to the states: there are 50 of them with 50 different legislatures and, therefore, a total of 50 different choices, respective to each legislature.

You can save up and move to the state that best reflects your values and respects your property rights — the same way state legislatures voting record reflects the majority of the people who live there.

And I’m reliably told this is Democracy, baby. 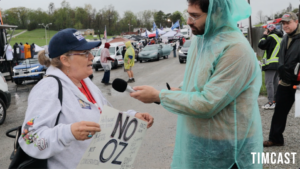