Under the care of entertainers who are desperate to stay in the spotlight, children become mere accessories to a public lifestyle

A debate recently erupted on Twitter concerning the rate Kim Kardashian paid a surrogate to carry her youngest son with ex-husband Kanye West.

The surrogate gave birth to Psalm, now two years old, in May 2019.

TMZ reported that the reality TV star paid the surrogate mother $45,000 in ten monthly installments and offered her an extra $5,000 for each additional child, if multiple implanted. The surrogate was insured $4,000 if she lost reproductive organs in the process. The surrogacy agency that matched them earned $68,850 from the transaction.

The 41-year-old’s net worth is estimated at $1.8 billion, ranking her #1,645 on Forbes’ billionaires list for 2022. Considering her wealth, some pundits expressed shock to find out the infinitesimal sliver she offered to the woman carrying her unborn children.

As some tweets pointed out, the nepotism recipient owns Birkins with a higher price tag than her surrogate’s salary. One Twitter user presciently asked, “Who do you think keeps this business running if not rich, entitled celebrities? lmao multimillionaire kim kardashian paid her surrogate a measly $45,000. does that sound fair to you?”

Her flippant, business-oriented attitude about surrogacy was jarring to many ordinary people who could never afford such a service even if they desired it. In light of the media mogul’s infamous advice to “get your f—ing a— up and work,” hearing the details of how she procured high-end designer pregnancies is rich with irony.

However, in an exclusive interview with Entertainment Tonight in 2017, Kim pushed back against the notion that she chose surrogacy for vain reasons: “Anyone that says or thinks it is just the easy way out is just completely wrong. I think it is so much harder to go through it this way, because you are not really in control.”

Actress Jamie Chung faced stigma for having twins via surrogate with her husband Bryan Greenberg in October 2021. In an interview with Today, Chung explained that she chose surrogacy to avoid risking her future career opportunities.

“People probably think, ‘Oh, she’s so vain. She didn’t want to get pregnant,’ and it’s much more complicated than that. For me, personally, and I will leave it at this, it’s like, I worked my ass off my entire life to get where I am. … I don’t want to lose opportunities. I don’t want to be resentful.”

The Dexter: New Blood actress continued: “I was terrified of becoming pregnant. I was terrified of putting my life on hold for two-plus years. In my industry, it feels like you’re easily forgotten if you don’t work within the next month of your last job. Things are so quickly paced in what we do.”

Chung’s comments suggested that if motherhood encroached on her time to work, or if bringing a child into the world inconvenienced her in any way, she would end up resenting her child rather than her own poor decision making.

Norwegian-American fashion designer Peter Dundas used a surrogate with his partner Evangelo Bousis. They informed The Times in March of their difficulties finding and keeping a surrogate that fit their preferences.

“Kim [Kardashian] was wonderful and tried to give us her surrogate,” said Dundas, in the same casual tone one would use discussing recommendations of dentists or hairdressers. Bousis ghoulishly described the challenge of choosing an ideal egg donor: “That’s who you’re really having a baby with. That’s the genes. So we were super picky. … Our casting went on for a year!”

Under the care of entertainers who are desperate to stay in the spotlight, children become mere accessories to a public lifestyle. Entertainers should be aware that postponing pregnancy for the sole purpose of accommodating their industry’s tendency to blacklist performers who prioritize growing their families over taking roles is a cowardly concession to the backwards value system of Hollywood. 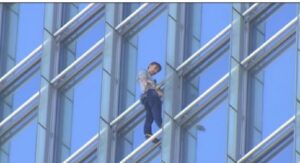