No matter what you think of Amber Heard, the outrage from her Twitter defense league is peak comedy

To the dismay of indignant Amber Heard supporters, TMZ reported this morning that Rihanna has decided to feature Johnny Depp in her upcoming Savage x Fenty Vol. 4 show, which premieres Nov. 9 on Amazon Prime. Depp will model the lingerie line’s men’s collection in his “cool and chic” cameo.

Depp’s partnership with the musician-mogul is the most recent example of the actor being restored to A-list status in the aftermath of his multi-million dollar defamation trial with ex-wife Amber Heard. Dior re-introduced the actor as the face of Dior Sauvage, and he even made a surprise appearance as MTV’s moonman at the VMAs in August.

Heard-heads are less than stoked that the 59-year-old has managed to quickly repair his reputation, and they are ruthlessly mocking him online in retaliation. Johnny Depp’s rugged rockstar persona is defo not age appropriate anymore, so he’s earned some razzing.

“sorry this is just taking me out. violent abuser aside who wants to see this decaying old man in underwear?” asked one Twitter user.

“aside from him being a drunkard wife beater how do you look at that man and think yes, this bloated corpse will be the face of my lingerie business,” wrote another.

“so brave of rihanna to bring awareness to erectile dysfunction,” added a third. Truly savage.

Rihanna isn’t off the hook either. Many who previously supported the singer’s pivot from music to marketing are questioning her intentions behind making such a controversial figure a face for her brand.

“everyone shocked that rihanna supports johnny depp as if she wasn’t posing with nicki minaj and her sex offender husband last year,” remarked one Tweet. Indeed, Rihanna posed for a picture with Nicki Minaj and her husband Kenneth Petty in September 2021, and Petty is in fact a registered sex offender (currently on house arrest for failing to update his status as such). Instagram posts aren’t endorsements, but fans were understandably perturbed.

Some came to Rihanna’s defense: “To all the people in Stan twitter having a meltdown all because Rihanna invited Johnny depp to her savage Fenty show . Rihanna is a survivor herself . She knows one when she sees one . Why else would she invite him ? Sit and think about that one.”

Others pushed back on the notion that Rihanna has a right to clear Johnny Depp of his former spouse’s domestic violence allegations given that she herself was a victim of physical abuse at the hands of Chris Brown in 2009.

One tweeted, “Rihanna giving Johnny Depp clout is actually a really good example of why it means nothing when someone says ‘as a victim of domestic violence, I support JD’. Like sorry that you went through that however it is still very not OK to support abusers!!!” Rihanna has publicly forgiven Chris Brown, but that doesn’t give her authority on Depp’s standing in the public eye after facing allegations of domestic abuse.

It remains to be seen whether a lingerie-clad Depp will create a PR disaster for Savage X Fenty, but aside from the unpleasantness of looking at a baby boomer in his underwear, that scenario is unlikely. Just grab some popcorn and laugh while Amber Heard stans cope and seethe. 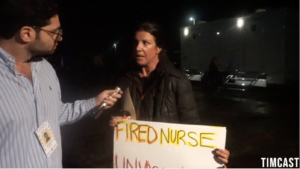