A cyclone of non-stop controversy has encircled Kanye West this month. Following the mogul’s bizarre proclamation that he would go “death con 3 on JEWISH PEOPLE,” and his subsequent suspensions on Instagram and Twitter, the cancel culture mob pressured West’s associates to publicly burn bridges with him.

Gap ended collaboration with the Yeezy designer back in September. Balenciaga followed suit after he unveiled “White Lives Matter” shirts at Paris Fashion Week. Johnny Depp’s smokeshow/trailblazing lawyer, Camille Vasquez, dropped Ye as a client, and so did his talent agency, CAA. Despite Kanye’s name taking up considerable real estate in the headlines this month, streams and sales of his music are on the decline.

Ari Emanuel, CEO of talent agency Endeavor, wrote an op-ed in the Financial Times titled “Business silence on Kanye West’s anti-Semitism is not an option.” The hit-piece charged business partners of Ye with “giving his misguided hate an audience.”

Of course, Adidas took their sweet time deciding whether or not they would cut business ties with Yeezy. Here is the activewear brand’s official statement from today: “adidas does not tolerate antisemitism and any other sort of hate speech. Ye’s recent comments and actions have been unacceptable, hateful and dangerous, and they violate the company’s values of diversity and inclusion, mutual respect and fairness.”

They continued, “After a thorough review, the company has taken the decision to terminate the partnership with Ye immediately, end production of Yeezy branded products and stop all payments to Ye and his companies. adidas will stop the adidas Yeezy business with immediate effect.”

It’s awfully convenient that Adidas’ decision followed a drop in stock price (and likely some sternly worded communications from nervous shareholders). Strangely, some seem shocked and appalled that the brand needed financial incentive to drop Yeezy.

One deluded Twitter user whined, “It shouldn’t have taken two weeks and a drop in stock price for @adidas to cut ties with Kanye.”

Another faction of the anti-Ye mob is dissatisfied that his anti-semitic comments have been met with such a swift response in contrast to brands and associates of the artist staying silent in the wake of equally controversial comments on race in past years (specifically, suggesting that slavery was a choice to the TMZ newsroom in 2018).

“Adidas have just announced they have ended their partnership with Kanye West due to ‘his hateful comments towards Jewish people’. No mention of his anti Black, white supremacist comments. Abuse against Black people is apparently perfectly ok with these companies,” complained another Twitter user. Knowing that Adidas doesn’t ensure a living wage for their workers, it should be no surprise that they don’t care about abuse.

Evidently, Adidas didn’t cut ties with Ye because his recent comments failed to “align with company values.” They dropped him as soon as he became a liability. Before Kanye’s anti-semitic Tweets, Adidas board members allowed him to play a pornographic film for them at a meeting. They were willing to tolerate any of Ye’s antics as long as he continued lining their pockets.

The online cancel culture mob should stop expecting mega-corporations to behave humanely or uphold their moral values. All Adidas cares about is their bottom line – as they should.

Kanye doesn’t need a partnership with Adidas or any other brand to stay relevant. He’s a powerhouse in the fashion and entertainment world in his own right. Encouraging his business partners and even his own family members to publicly denounce him is not only futile, it’s envious, and born out of spite rather than a desire for compassion and tolerance.

The future of Kanye West’s career is in flux, but one thing is certain: there is no sign of him stopping or slowing down any time soon. 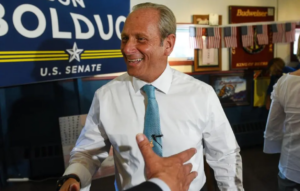