Phelps said that the issues surrounding trans swimmer Lia Thomas are complicated, but that sports should be played on an even playing field

Phelps, the most successful and most decorated Olympian of all time with 28 medals, compared the issue of athletes like Thomas to doping to secure a competitive advantage in the pool.

Phelps spoke to CNN’s Christiane Amanpour this past week about the topic, giving his insights.

“I think this leads back to the organizing committees again,” Phelps said. “Because it has to be a level playing field. I think that’s something that we all need. Because that’s what sports are, and for me, I don’t know where this is going to go. I don’t know what’s going to happen.”

Thomas has been monopolizing the pool in women’s swimming competitions this season. Previously she competed on the school’s men’s team. This season’s success has ignited criticism over allowing transgender women to compete against biological females.

The NCAA and its rules on transgender student-athlete participation have received fierce criticism. The organization’s rules require trans women athletes to undergo a minimum of one year of testosterone suppression treatment before competing on a women’s team.

As for Thomas, she switched to the women’s team in 2020. But, she has been receiving the treatment for nearly three years, surpassing the NCAA’s rules on the matter.

Phelps told Amanpour that athletes should feel comfortable in their own skin but admitted he isn’t sure what will happen in the future.

“I don’t know what it looks like in the future. But it’s hard. It’s very complicated, and this is my sport; this has been my sport my whole entire career, and honestly, the one thing I would love is everybody being able to compete on an even playing field,” Phelps said.

Thomas’ fellow swimmers have not voiced their opinion publicly. However, some have spoken out anonymously, saying that Thomas is arrogant.

“She compares herself to Jackie Robinson. She said she is like the Jackie Robinson of trans sports,” one of her teammates told the Washington Examiner. Robinson broke barriers as the first black baseball player in the Major League.

As for now, Thomas will compete at next month’s Ivy League championships and has already qualified for the NCAA championships in March. 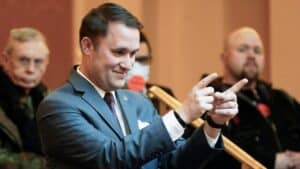