When asked about the secret of living a long life, Lawrence Brooks would say, "Serve God and be nice to people."

Brooks lived in the Central City neighborhood of New Orleans. According to his daughter, Vanessa Brooks, he died at home in his own bed as per his wishes. She confirmed his passing in a statement to Military Times.

His bishop, Rev. Morris Thompson Jr., said Brooks was a man of deep faith. The bishop told local news that funeral arrangements were pending. Brooks was a faithful member of St. Luke’s in New Orleans.

“When asked about the secret of living a long life, he would say: ‘Serve God and be nice to people.’ On this day, take a moment to honor his faithful service to our country and to the church by being kind to everyone you meet,” Thompson shared in a statement to church members.

Brooks has five children, five stepchildren, and dozens of grandchildren and great-grandchildren. His wife, Leona, passed away shortly after Hurricane Katrina passed through New Orleans in 2004.

Brooks celebrated his 112th birthday in September 2021 at his home in Central City. Local residents gathered for a drive-by celebration.

The National World War II Museum hosted the drive-by party. The museum usually hosts an annual party for Brooks at its New Orleans location. However, the party has been brought to his front door for two years because of the coronavirus pandemic.

“The Board of Trustees, staff, and volunteers at The National WWII Museum will forever cherish the memories we shared with Lawrence Brooks,” said Stephen J. Watson, Museum President & CEO.

“He was a beloved friend, a man of great faith, and had a gentle spirit that inspired those around him. As the nation’s oldest known living veteran, he proudly served our country during World War II and returned home to serve his community and church. His kindness, smile, and sense of humor connected him to generations of people who loved and admired him. We send our sincerest condolences to his daughter Vanessa and the entire Brooks family,” Watson continued.

Brooks grew up near Baton Rouge. He was working at a sawmill in 1940 when he was drafted into the U.S. Army.

After the famed Attack on Pearl Harbor, Brooks was assigned to the 91st Engineer General Service Regiment stationed in Australia. The 91st was an Army unit that built bridges, roads, and airstrips for planes.

He never had a combat job, a legacy of racist policies that relegated many Black soldiers to service-oriented jobs in the then-segregated U.S. Army.

Brooks was discharged in August 1945 as a private first class.

When Brooks left the Army, he worked as a forklift driver before retiring in his 60s. 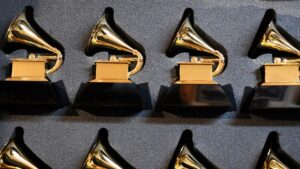 The 2022 Grammy Awards Are Postponed Due to Omicron Surge