The bill, SB 1100, makes Oklahoma the first in the nation to ban the gender marker option in explicit terms.

Under the new law, “the biological sex designation on a certificate of birth issued under this section shall be either male or female and shall not be nonbinary or any symbol representing a nonbinary designation,” the bill states.

States such as South Dakota, South Carolina, Tennessee, West Virginia, and Texas already limit gender designations to be either male or female. Oklahoma is the first state to enact a complete ban on the use of non-binary markers on official identity records.

In late 2021, Oklahoma issued its first nonbinary birth certificate. The move prompted Republican lawmakers and Governor Stitt to take action against the practice.

Stitt said he would take “whatever action necessary” to prohibit the practice of issuing gender-neutral documentation.

“I believe that people are created by God to be male or female. Period,” Stitt continued. “There is no such thing as nonbinary sex, and I wholeheartedly condemn the purported [Oklahoma State Department of Health] court settlement that was entered into by rogue activists who acted without receiving proper approval or oversight.”

In 2020, Oklahoma elected the nation’s first openly nonbinary legislator in the country, Oklahoma City Democrat Rep. Mauree Turner, who said it was painful to have colleagues single out those who are gender diverse.

“I find it a very extreme and grotesque use of power in this body to write this law and try to pass it — when literally none of them live like us,” Turner tweeted at the time.

According to the Movement Advancement Project, sixteen states, along with Washington, D.C., currently allow residents to identify as male, female, or the gender-neutral “X” on birth certificates.

The ban has raised some concern regarding discrepancies between state records and federal documents, as the United States has begun allowing travelers to identify as nonbinary on passport applications.

In early April, passport application forms began reflecting the additional choice. The State Department is the first U.S. federal agency to offer the gender “X” marker on an identity document.

The Biden administration announced that it would include a third gender option on passport applications last year.

The decision followed a lawsuit filed by Dana Zzyym, who sued the State Department over the limited gender options on passport applications. 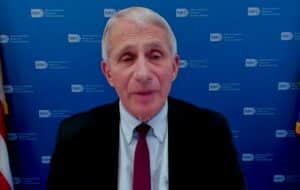 Dr. Anthony Fauci Says US ‘Out of Pandemic Phase’ of COVID-19