Oil Prices Surge to High Not Seen Since 2008

With reduced production in the United States, and a potential ban on import from Russia, energy prices continue to increase

On Monday, oil prices reached their highest levels since 2008 as the United States and its allies consider a ban on Russian oil imports and anticipate delays in the return of Iranian oil to the global markets.

In early trading, Brent crude hit $139.13, and U.S. West Texas Intermediate (WTI) reached $130.50. Both are benchmarks that have now reached their highest levels since July 2008.

According to U.S. Secretary of State Antony Blinken, the United States and its European allies are considering banning imports of Russian oil. The White House is working closely with key Congressional committees to move forward with their own ban.

If most of Russia’s oil exports are banned, there could be at least a 5 million barrel per day (BPD) shortfall. Analysts at Bank of America said that means oil prices could surge as high as $200 per barrel.

There are further projections by analysts in the financial sectors. JP Morgan’s analysts have said oil could skyrocket to $185 this year, and analysts at Mitsubishi UFJ Financial Group Inc said oil might reach $180, resulting in a global recession.

“If the supply tightness does not ebb, oil may exceed way above its record high,” said Howie Lee, an economist at Singapore’s OCBC bank.

“In the worst-case scenario of a complete sanction on Russia’s energy exports, I won’t be surprised to see Brent trading above $200,” he added.

Russia is the world’s leading exporter of crude and oil products combined. The country exports around 7 million barrels per day, representing about 7% of the global supply.

Global oil prices have spiked more than 60% since the start of 2022, along with other commodities, raising concerns about world economic growth and stagflation. 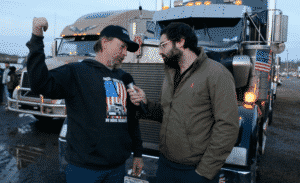 WATCH: Timcast Checks in with Trucker Convoy at Last Stop Before DC