Governor Mike DeWine of Ohio has been sent a bill that would reduce the number of hours of training teachers and staff members must complete in order to carry a gun in school.

House Bill 99 was passed by both the state’s House and Senate.

The measure authorizes the creation of the Ohio School Safety Crisis Center and tasks the Ohio Mobile Training Team “to develop a curriculum and provide instruction and training for individuals to convey deadly weapons and dangerous ordnance in a school safety zone.”

H.B. 99 would “expressly exempt such individuals from a peace officer basic training requirement.”

Peace officer basic training totals 737 hours under current state law. If the new bill becomes law, school staff would only need to go through 24 hours of training to carry on school grounds.

Schools would have the ability to require more hours of training at the discretion of their individual administrations.

School staff members who wish to carry on campus must also have a valid concealed handgun license.

If an educator was authorized to go armed in a school, the board of education or school governing body would be required to issue a public notice.

“The bill, sponsored by Rep. Thomas Hall (R-Madison Township), passed the House in November with a 59-33 vote but was returned to the House for a concurrence vote after the Senate’s passage,” reports NBC 4I.

During a Senate Veteran and Public Safety Committee Meeting on May 31, a representative of the Ohio Education Association spoke out against the policy.

“Asking teachers who are already overburdened to add more to their plate by serving in a dual role where they’re both responsible for educating children and now in some cases where this might be implemented for armed security in schools, we think is not really addressing the issue,” said Scott DiMauro, the union’s president.

Rob Sexton, the legislative affairs director for the Buckeye Firearms Association, spoke in favor of H.B. 99.

“For me, I think it gets down to this: Do we want our kids to have a fighting chance in the event that the worst happens, right?” Sexton said. “And for us, we’d just like a school to be able to have that option. Allows local school districts to make their own decisions.”

Governor DeWine has signaled his intention to support the bill.

“Last week I called on the General Assembly to pass a bill that would allow local school districts, if they so chose, to designate armed staff for school security and safety,” the governor said in a statement on June 2. “My office worked with the General Assembly to remove hundreds of hours of curriculum irrelevant to school safety and to ensure training requirements were specific to a school environment and contained significant scenario-based training. House Bill 99 accomplishes these goals, and I thank the General Assembly for passing this bill to protect Ohio children and teachers.”

“I look forward to signing this important legislation,” DeWine said. 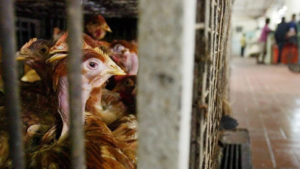