Swedish Prime Minister Magdalena Andersson and Finnish President Sauli Niinistö will meet with President Joe Biden at the White House this week as the nations’ NATO memberships remain in flux.

Niinistö said on May 15 that he had discussed his country’s decision with Russian President Vladimir Putin. If Finland were formally admitted to the alliance, Russia’s border with NATO would expand by roughly 800-miles and essentially double the total land border.

“Actually, the surprise was that he took it so calmly,” the president said during an interview with CNN. Niinistö said he would continue to monitor Russia’s response to the change.

Russian energy supplier RAO Nordic Oy cut off Finland on May 14 following the news of the country’s pending NATO application.

Prior to Russia’s invasion in February, Putin asked for an explicit promise that NATO would not admit Ukraine as a member as it would be a threat to his country’s national security.

A spokesperson for the Kremlin called Finland’s decision a threat and said that “Russia will be forced to take retaliatory steps, both of a military-technical and other nature, in order to stop the threats to its national security arising in this regard,” per The Guardian.

During her announcement over the weekend, Prime Minister Magdalena Andersson said the Russia-Ukraine conflict has “fundamentally changed” the nation’s security evaluations.

Sweden’s social democratic party, the ruling political faction of which Andersson is a member, had opposed joining the alliance for years.

Admitting Sweden and Finland to NATO is a cause for concern for some of the bloc’s members. Turkish President Recep Tayyip Erdogan has indicated he may oppose their admission because he says their governments have “a clear, open attitude towards terrorist organisations,” obliquely referring to the Syrian Democratic Forces’ Syrian Kurdish People’s Protection Units (YPG).

“Turkey regards the YPG as a terrorist organization, associating it with the Kurdistan Workers’ Party (PKK) — a militant, separatist group that has waged a violent campaign against the Turkish government since the mid-1980s as part of an effort to establish an independent Kurdish state,” reports Business Insider.

Officials from Turkey have said they would be willing to negotiate if security guarantees could be implemented.

President Biden will host the Northern European nations on May 19. The leaders will discuss NATO, the security status of Europe as a whole,  “as well as strengthening our close partnerships across a range of global issues and support for Ukraine,” according to a statement from the White House.

White House press secretary Karine Jean-Pierre said during a briefing on May 17 that the administration is “very confident” that Sweden and Finland will be admitted to the military alliance. 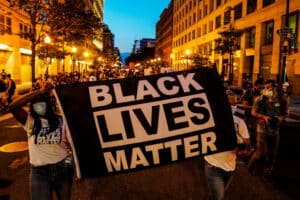