Tennis player Novak Djokovic was granted permission to stay in Australia by a judge but may still face deportation, according to the federal government.

Djokovic was granted a medical exemption to Tennis Australia’s vaccine mandate and traveled to the country to compete in the Australian Open. The Serbian tennis pro has won the competition for the last three years.

When he arrived last week, however, he was denied entry due to an issue with his visa. He spent eight hours at the Melbourne Tullamarine Airport while waiting to hear if he would be allowed to stay in the country. Media outlets in the nation reported that Djokovic’s team had applied for the wrong visa for someone granted a COVID-19 medical exemption.

The Australian Border Force said he failed to meet entry requirements, and “his via was subsequently canceled.” Officials said he did not qualify for an exemption to the national COVID-19 vaccination requirement for all non-citizens.

On Instagram, Serbian President Aleksandar Vucic said that he had spoken with Djokovic while at the airport and stated that Serbian authorities were working to ensure “the harassment of the best tennis player in the world can be stopped in the shortest possible time.”

The chaos surrounding Djokovic’s entry seemed to stem from miscommunication between the federal and state government. Prime Minister Scott Morrison initially signaled he would let the state of Victoria, where the Melbourne-based event is being held, decide how it would enforce the COVID-19 rules.

He then backtracked and said it was up to federal authority to regulate who was allowed in and out of Australia.

“Rules are rules,” Morrison said in a statement.

Djokovic’s visa was reinstated by Federal Circuit Court Judge Anthony Kelly on Jan. 10. Lawyers for the tennis player argued that he did not need to be vaccinated because he had recently recovered from COVID-19.

Judge Kelly said in his ruling that the decision was made before the athlete had enough time to speak with his lawyers. Border agents allegedly gave Djokovic 20 minutes to supply additional documentation to support his visa after his 4 A.M. arrival. The judge said this was unreasonable and echoed the Prime Minister, saying, “Rules are rules.

“Stated in other terms: those rules were not observed,” Kelly added.

He ordered the government to release Djokovic from the Melbourne quarantine hotel where he was being held.

The immigration minister “will consider whether to exercise a personal power of cancellation,” Christopher Tran, a lawyer for the Australian government, told the judge.

“That would mean that the nine-time Australian Open winner and defending champion could again face deportation and could miss the tournament, which starts on Jan. 17. It could also bar him from the country for three years,” per AP News.

Djokovic has been permitted to practice for the tournament while being held in quarantine.

He posted a photo online of himself on one of the tournament courts and expressed his gratitude for the judge’s decision.

I’m pleased and grateful that the Judge overturned my visa cancellation. Despite all that has happened,I want to stay and try to compete @AustralianOpen
I remain focused on that. I flew here to play at one of the most important events we have in front of the amazing fans. 👇 pic.twitter.com/iJVbMfQ037

“Djokovic’s participation in the Australian Open has become a hot political topic, with many Australians furious that he was granted an exemption to enter the country,” reports NBC Sports. “Djokovic’s revelation on social media that he was heading to Australia seeking a record 21st major title sparked some debate and plenty of headlines, with critics questioning what grounds he could have for the exemption and backers arguing he has a right to privacy and freedom of choice.”

The Australian Open begins on Jan. 17. 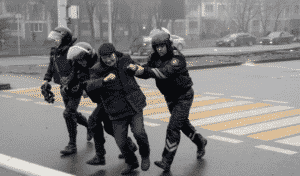