On Sunday, North Korea fired the most powerful missile it has tested since President Biden took office.

Both Japanese and South Korean militaries say the missile was launched on a high trajectory, appearing to avoid the territorial spaces of neighbors. The missile reached a maximum altitude of 1,242 miles and traveled nearly 500 miles before landing in the sea.

The missile launch on Sunday was North Korea’s seventh of such exercises this month.

The recent launches have amplified attention on a broken economy impacted by decades of mismanagement and crippling U.S.-led sanctions related to its nuclear weapons program.

Japanese Defense Minister Nobuo Kishi told reporters that the missile was the longest-range the North has tested since November 2017.

On Jan. 20, North Korean leader Kim Jong Un chaired a ruling party meeting where senior party members made a veiled threat to lift the nuclear moratorium. The nation’s leaders cited what they perceived as U.S. hostility and threats.

According to Lee Choon Geun, a missile expert at South Korea’s Science and Technology Policy Institute, the latest launch suggests that the moratorium is already broken.

The South Korean President said the situation around the Korean Peninsula is beginning to resemble 2017. North Korea’s provocative run in nuclear and long-range missile testing that year resulted in an exchange of war threats between Kim Jung Un and former President Donald Trump. 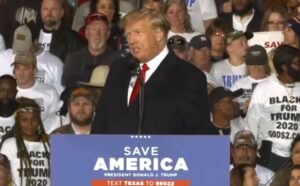 Trump: ‘We Will Ban Men from Participating in Women’s Sports’