The test comes less than one week after a hypersonic missile test, amid calls for the country to denuclearize

On Tuesday, North Korea fired a suspected ballistic missile into the sea, increasing tensions for neighboring countries less than a week after Pyongyang reported testing what it said was a hypersonic missile.

South Korea’s national security council expressed “strong regret over the launch” after an emergency meeting with the nation’s president.

According to Japanese Prime Minister Fumio Kishida, it is “extremely regrettable that North Korea continues to launch missiles.”

Tuesday’s statement said, “While we have assessed that this event does not pose an immediate threat to U.S. personnel or territory, or to our allies, the missile launch highlights the destabilizing impact of the DPRK’s illicit weapons program. The U.S. commitment to the defense of the Republic of Korea and Japan remains ironclad.”

According to Japanese government spokesman Hirokazu Matsuno, there were no immediate reports of damage to Japanese aircraft or vessels.

“The suspected missile is estimated to have flown approximately up to 700 kilometers and landed outside of Japan’s exclusive economic zone,” he said.

Seoul’s Joint Chiefs of Staff said the missile had been fired from land at around 7:27 a.m. local time Tuesday.

Pyongyang has not issued any immediate claims about its latest test.

This second test in a week came after six countries, including the United States and Japan, urged North Korea to cease “destabilizing actions” ahead of a U.N. Security Council closed-door meeting.

Multiple countries, including France, Britain, and Ireland, joined the U.N. meeting for North Korea to “engage in meaningful dialogue towards our shared goal of complete denuclearization.” 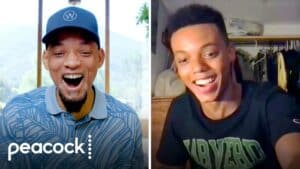 The 'Fresh Prince of Bel-Air' Gets a Fresh Reboot