Local officials said that a North Carolina police chief has been placed on unpaid leave and probation for telling officers about a “clinic” that would issue them a COVID-19 vaccination card without receiving the shot.

T.J. Smith, police chief of Oakboro Town, North Carolina, violated policies including fraud, willful acts that endanger the property of others and serving a conflicting interest when he allegedly told officers about the scheme.

Town Administrator Doug Burgess outlined the allegations in a letter addressed to the police chief.

According to the letter, the violations resulted from “detrimental personal conduct including notifying law enforcement officers to attend a ‘clinic’ where they would be able to obtain proof of COVID 19 vaccination cards without being vaccinated.”

The letter, released Tuesday, says Smith was placed on unpaid leave for two weeks and probation for six months beginning Dec. 21. Smith has the right to appeal the action according to the letter. 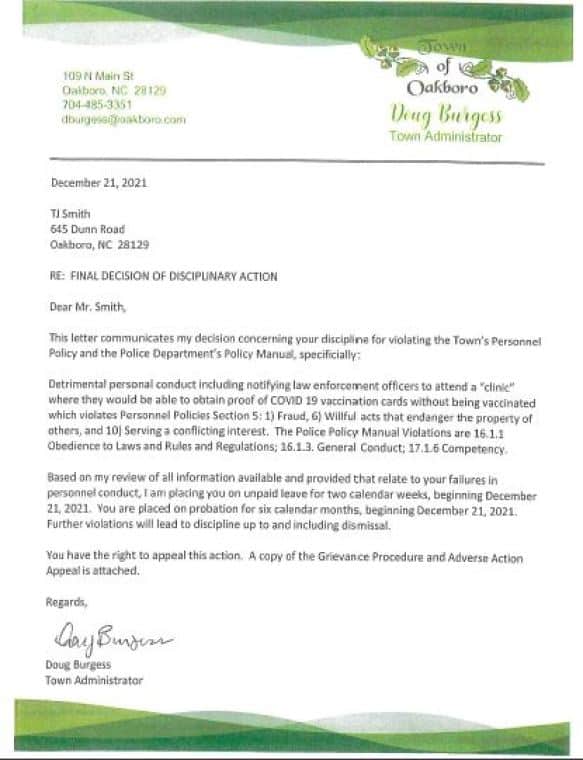 The disciplinary measures came after the town hired Blue Chameleon Investigations to conduct an independent probe into the matter.

Smith gave the following statement regarding the allegation to a local newspaper this week:

“To make a long story short, in retrospect, I made a mistake. After I got off the phone with that friend, I called two other officers (not in my department) and passed on information about what was described as a ‘self-vaccination’ clinic. I got one phone call, hung up and made two others. I didn’t sit back and digest the information, ruminate on it, or otherwise give it much thought. I just passed it on.”

The accusations of fraud and misconduct regarding vaccines come as the Omicron variant surges in the U.S.

North Carolina could see as many as 10,000 COVID-19 cases a day at the peak in January, as stated earlier this week by Dr. Mandy Cohen, the state’s Department of Health and Human Services secretary. 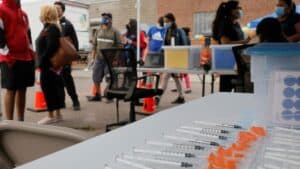 An Overview of the Impact of Vaccine Mandates on US Employers