A California judge dismissed a lawsuit against Nirvana made by the man who appeared as a naked baby on the 1991 cover of the band’s classic album Nevermind.

Judge Fernando Olguin dismissed the case on Monday after lawyers for the plaintiff missed a deadline to refute Nirvana’s estate’s request to dismiss the suit last month.

The image was taken in 1990 at the Pasadena aquatic center when Elden was four months old. Elden’s father Rick was involved in special effects for Hollywood and permitted his son to model for the band’s iconic album.

At the time, Elden’s father shared a studio with photographer Kirk Weddle, who had the contract to photograph a baby underwater.

Elden’s father previously told the media, “Babies have a gag reflex. If you blow in their face, they hold their breath. I blew in Spencer’s face and put him in the water. Kirk was shooting 18 frames a second, so Spencer was in the water for about two seconds.”

Elden has since claimed that appearing on the iconic cover caused “extreme and permanent emotional distress with physical manifestations’ and loss of education, wages, and enjoyment of life.”

Lawyers for Nirvana’s estate said Elden had “spent three decades profiting from his celebrity as the self-anointed “Nirvana Baby.”

“Elden re-enacted the photo for money multiple times. He even had the album title tattooed across his chest, he appeared on a talk show wearing a self-parodying nude-colored onesie, and even using the connection to try to pick up women.” the lawyers said in a statement to NBC News.

The legal team said that the statute of limitations had expired and that Elden’s claims were far too absurd to consider.

Elden has until January 13 to file a dispute. 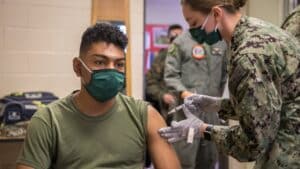