Classic 90s video game Goldeneye 007 is reportedly being rereleased for Nintendo Switch Consoles, and will include online play, according to a Tuesday Nintendo Direct announcement.

A slew of new games were announced during Tuesday’s Nintendo Direct livestream including a rerelease of their Nintendo 64 (N64) 1997 classic Goldeneye 007, a licensed tie-in to the 1995 James Bond film of the same name, for the Nintendo Switch Online service as an exclusive to expansion pass members. Along with the game’s upcoming rerelease, the game will also reportedly feature compatible online play through the console’s online network. Though no release date has been announced as of the livestream, Nintendo simply advertised “Coming Soon” at the end of the game’s teaser trailer.

N64’s original release of Goldeneye 007 featured a competitive head-to-head multiplayer feature which the company appears to be recreating to incorporate online multiplayer functionality.

Nintendo America tweeted the game’s announcement along with the teaser trailer, “Ready up for your objective, secret agents. Nintendo 64’s GoldenEye 007 is coming soon to Nintendo Switch for #NintendoSwitchOnline + Expansion Pack members, now with online play!”

Goldeneye 007 reportedly will also be released by Microsoft for the first time on their current line of Xbox consoles, and will be available to stream through their company’s online service, Xbox Game Pass, according to a tweet by video game developer Rare. Xbox Game Pass’ version of Goldeneye 007 will feature in-game achievements, 4k resolution, and smoother frame rate, according to the company’s tweet.

Goldeneye 007 was originally developed by Rare and released in partnership with Nintendo in 1997. The company was purchased by Microsoft for $375 million after winning a bidding war between Nintendo and Activision who were also seeking to purchase Rare.

Other games announced during Tuesday’s Nintendo Direct included Fire Emblem Engage slated for release in January, Pikmin 4 also scheduled for a release sometime in 2023, Kirby’s Return to Dream Land Deluxe in late February, and The Legend of Zelda: Tears of the Kingdom, the follow-up sequel to 2017’s The Legend of Zelda: Breath of the Wild, scheduled for a May release next year. 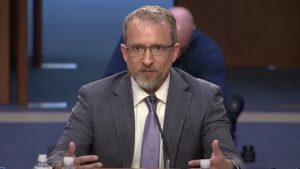