Nike has fired a longtime employee after refusing to supply his COVID-19 vaccination records to a third-party verification service.

Dex Briggs claims he was fired from his marketing position at Nike headquarters in Beaverton, Oregon, after 26 years. The termination occurred even though Briggs was fully vaccinated against the coronavirus.

Briggs, who is married and has a son, said that he found Nike’s vaccination verification process far too worrying to comply with. Nike has required vaccination records to be uploaded to software created by an unidentified third-party firm.

That firm chosen by Nike has permission to share the information with others to confirm the vaccination, which Briggs says is a breach of his privacy. Briggs has formerly been the victim of identity theft and understands the risks involved in sharing the information.

“I have my vaccination card. I’m quite willing to show you that. But I’m not willing to give my personal information to this (outside) company and any other company they want to share it with, without even telling me who they are,” Briggs told a local newspaper, The Oregonian.

Approximately 14,000 workers are assigned to Nike’s headquarters near Beaverton, Oregon.

In September, Nike announced its official vaccine mandate to employees.

Despite the Biden Administration’s vaccine mandate for large businesses being struck down by the Supreme Court, companies can still choose to enact such a mandate themselves. Nike is one of those companies choosing to continue enforcing such requirements.

Nike has said that the mandate aims to get employees to return to the offices in Beaverton. They were due to return from earlier this month, but the surge of the COVID Omicron variant has pushed the return date back indefinitely.

Oregon is presently working on a proof of vaccination card that will be similar to the widely-used Excelsior Pass of New York state. It can be downloaded as an app or in paper form and provides a QR code that can be used to verify a person’s vaccination status.

Companies such as Nike have turned to third-party vaccine verifiers hoping to have a dependable, digital format to verify employee vaccination status. The firm providing Nike with the service has not been identified publicly. However, companies including GoGetDoc and Clear To Go offer these types of software.

“We believe we are better together,” Chief Human Resources Officer Monique Matheson wrote in a memo announcing the vaccine requirements. Nike has not publicly responded to Brigg’s claims as of yet.

Briggs said the mandates did not bother him when announced because he had been vaccinated.

“I’m already vaccinated, so that doesn’t really matter,” Briggs said, he thought at the time. He had accepted that a private company like Nike has a right to set its own vaccine policy.

Briggs was frustrated when the company moved forward with the verification process, withholding the company’s name and disclosing who would have access to his personal information.

As a result of failing to comply, Briggs was terminated by Nike. 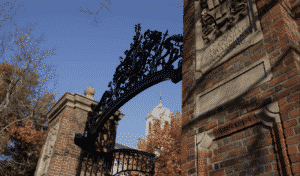