A former investigative reporter for Buzzfeed will now cover reports and content produced by right-leaning organizations for The New York Times.

Ken Bensinger is joining the publication’s Political desk as part of the “democracy” team. He will specifically focus on “right-wing media” in the new position

“Understanding the way information is developed, circulated and absorbed on the right is vital at this precarious moment, and requires a healthy measure of patience, empathy and understanding along with investigative chops, skepticism and toughness,” wrote political editor David Halbfinger in the paper’s announcement.

Bensinger spent the last eight years working for Buzzfeed, which has now dissolved its investigation team.

Breitbart notes that The Times’ announcement omits “any mention of Bensinger being the lead reporter on the uncritical Buzzfeed story that injected the infamous Steele Dossier into the public conversation in 2017, with the headline: ‘These Reports Allege Trump Has Deep Ties To Russia.’”

The Dossier was ultimately discredited as “full of false information” but “Bensinger never reported any follow-up stories on the topic of the Dossier, according to his byline on Buzzfeed, after it was confirmed to be disinformation,” the outlet noted.

“This, to me, is not a job about stereotyping but about explaining and understanding,” Bensinger wrote in a Twitter thread announcing his new position. He asked his followers to contact him via direct message, Signal, phone, or email with “ideas, tips, thoughts, etc.”

“I’m excited about this beat, which is important and complex and (I think) requires sensitivity and nuance at a critical time for this nation,” he wrote.

A spokesman for The Times did not respond to an inquiry from Fox News asking if the publication intends to hire a reporter to specifically cover progressive or left-wing media.

“The Politics desk created a new beat on this topic because many Americans rely solely on right wing media for their information, which often bears little resemblance to what is being reported in mainstream media,” the spokesperson said. “We want our readers to be informed about what is driving the political decisions of many Americans.” 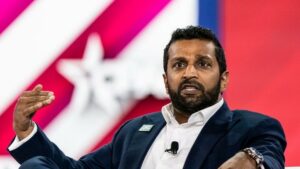