A stay of the judge's ruling ending mask mandates in school was announced on Jan. 25

The day after a New York Judge ruled the state’s mask mandate for schools was unlawful, Jeanna put her first-grader on the bus wearing a mask.

She, like other parents in her Long Island school district, was thrilled when State Supreme Court Judge Thomas Rademaker ruled on Jan. 24 that the Department of Health did not have the authority to enforce the mandate.

Rademaker wrote that the mandate had been “promulgated and enacted unlawfully by an executive branch state agency, and therefore void and unenforceable.”

Following his ruling, school districts across New York notified parents that masks would no longer be required in schools.

Jeanna, who asked that we do not publish her last name, used to work for her son’s school district. She left her previous job for the position because she wanted to be involved in her son’s education. Her son, now six, was in preschool when the COVID-19 pandemic broke out.

“He has never experienced a normal day of elementary school,” Jeanna told Timcast.

The school’s vaccine mandate has put Jeanna in professional limbo. She is unvaccinated and refused to comply with the weekly testing requirements that became a new condition of her employment. She is not fired, but she also cannot work in the school or collect unemployment. She is allowed to volunteer as a “Room Mom” or at the school’s book fair.

Her son’s school has strictly enforced mask mandates since they were introduced in 2020. Jeanna recalled an incident from the previous school year where a young student had gotten sick and thrown up in class. The nurse’s office was down a flight of stairs. Despite her illness, the student was not allowed to remove her face-covering and had to go to the nurse while wearing her vomit-filled mask.

Jeanna and like-minded parents waited that night for a message from their Superintendent regarding the legal development. Jeanna assumed the judge’s ruling would immediately end the mandate. She knew her niece’s school district had already confirmed the mandate repeal.

Sometime after 10 P.M. on Jan. 24, the school district sent an email to parents without a directive. It included a copy of the judge’s ruling and a statement from Governor Kathy Hochul saying her administration intended to pursue an appeal.

The email “didn’t say masks were options, didn’t say anything like that,” Jeanna said.

The district said there would be an additional email in the morning with more information about any developments.

At 6:44 A.M. on Jan. 25, Jeanna received an email from the Superintendent of her district confirming New York state was appealing the ruling. The Superintendent, who Timcast is not naming for Jeanna’s privacy, wrote that it was his understanding that the appeal triggered an automatic stay of enforcement and that the mask mandate was still in effect.

Children in the district would be expected to come to school — once again — in their masks.

Jeanna and the parents in her community immediately took to the internet to verify the accuracy of the Superintendent’s claim. They found that the prohibitory injunction issued by Rademaker, which discontinued an unlawful act, did not induce a legal stay.

It was just before 8 A.M. Jeanna called the Superintendent’s office and was told he was not in yet. She left a message with his secretary.

“We found the appeal online. There is no stay,” she says she told the woman. “You can’t tell me my son has to wear a mask because now you are violating the judge’s decision.”

The secretary said the Superintendent would call her back. He never returned her call.

Jeanna’s son was confused. He knew his cousins and friend in other districts were not wearing masks to school. Jeanna said she promised her six-year-old she would figure it out.

About an hour later — after her masked son had left for school — Jeanna emailed the Superintendent and insisted he produce documentation that proved the mask mandate was still in effect or else he was illegally requiring masks.

Despite not being permitted to work, Jeanna is still on the staff messaging service. The school sent a message to its employees saying that due to the infections rate in their area, masks were still required in the school.

Then, one of Jeanna’s friends found a statement online from a law office — Ingerman & Smith LLP — that said the mandate was unenforceable following the ruling from Rademaker.

Ingerman & Smith represents more than 70 New York school districts, B.O.C.E.S., colleges and universities, libraries, and municipal agencies — including Jeanna’s district. Many of the districts had already confirmed the mandate’s end via email the night before.

It was 9:44 A.M. She called the Superintendent’s office again and told his secretary about the statement from the law firm affirming that requiring students to wear masks was now illegal.

At 10:02 A.M., parents received an email from the school district saying there was no stay of the judge’s decision and that masks were now optional.

Jeanna called the school nurse, who went to her son’s gym class to tell him he could take his mask off.

Jeanna says after witnessing the mixed message delivered to staff and parents, she has no trust in the district.

“I feel like they are trying to do what is in their best interest,” she said.

“I know [the Superintendent] was getting swamped with calls today. I understand,” she added. But the lengthy delay and mixed signals were not acceptable.

Jeanna thinks the district most likely wanted to maintain the mandate despite the court’s decision.

“I feel like they were looking for a loophole to try and keep the masks in place,” Jeanna said.

She says she objects to masks because they are not effective and can impair learning. She noted the challenges for students in speech therapy who can not see their instructor’s mouth or students learning to read who are not able to distinguish digraphs that are muffled by the face-coverings.

The relief from the mandate was ultimately temporary.

For one day, New York students could not be made to wear a mask in the classroom.

Just after 4 P.M. on Jan. 25, an appeals court judge granted a motion to block Judge Rademaker’s decision that ended the in-school mask requirement.

Tomorrow, students across the state will be expected to return to school wearing masks.

Editor’s Note: A previous version of this article identified Jeanna by the pseudonym “Mary” due to the source’s request for privacy. After publication, the source asked for the pseudonym to be replaced with her real first name, Jeanna. 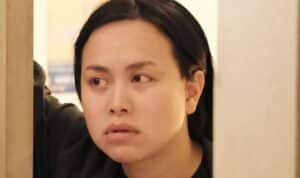