New York Governor Kathy Hochul has declared a disaster emergency in her state amid the rising number of positive samples of polio taken from wastewater.

State officials say they initiated a wastewater surveillance program to detect and assess the spread of the virus after a resident in Rockland County tested positive in July.

As of Sept. 9, the U.S. Centers for Disease Control and Prevention (CDC) has confirmed the presence of polio in 57 samples.

Health officials believe the infected individual may have contracted the virus — which can cause paralysis — through local transmission and worry about the potential for community spread.

We're making it easier for New Yorkers to get their polio vaccine if they haven't already received it.@HealthNYGov is ramping up its vaccination efforts and EMTs, midwives, and pharmacists are now able to provide the vaccine.

According to Hochul’s executive order, polio was last identified in New York in 1990. Her directive urges the state government to “support the municipalities, localities, and counties in their efforts to facilitate and administer vaccinations and tests for poliovirus, and to prevent the disease from continuing to spread.”

The order expands access to vaccinations by broadening the groups of medical professionals who are allowed to administer polio shots. Emergency medical technicians, midwives, and pharmacists are among the medical workers who may administer polio vaccines.

“We’re making it easier for New Yorkers to get their polio vaccine if they haven’t already received it,” Hochul wrote in a statement released on Twitter. “[The state’s health department] is ramping up its vaccination efforts and EMTs, midwives, and pharmacists are now able to provide the vaccine. Learn more: http://health.ny.gov/polio.”

BREAKING—New York declared a state of emergency over #polio to boost vaccination rates amid evidence that the virus is spreading. Unvaccinated individuals who live, work, go to school or visit NYC metro area are at the highest risk of paralytic disease.https://t.co/lyeodrLRDK

“On polio, we simply cannot roll the dice,” State Health Commissioner Dr. Mary T. Bassett said in a statement. “If you or your child are unvaccinated or not up to date with vaccinations, the risk of paralytic disease is real. I urge New Yorkers to not accept any risk at all.”

Polio vaccines contain no live virus and protect 99 to 100 percent of those who get all recommended doses, according to the health department.

“Polio immunization is safe and effective – protecting nearly all people against disease who receive the recommended doses. Do not wait to vaccinate,” Bassett said. “If you are unsure of you or your families’ vaccination status, contact a healthcare provider, clinic, or local county health department to make sure you and your loved ones receive all recommended doses.”

Rockland County, the suspected epicenter of the outbreak, has one of the lowest polio vaccination rates in the state, according to data from the state’s department of health.

New York is not the only city to be dealing with the virus, with London reporting earlier this year that they believed the city was experiencing community spread for the first time since the virus was previously eradicated.

Brett MacDonald contributed to this report 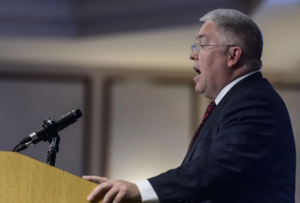