Nevada Senate race could be the closest election in the country during next week’s midterms.

Incumbent Senator Catherine Cortez Masto is being challenged by former Attorney General Adam Laxalt. Polls indicate both candidates are supported by 47% of likely voters in Nevada.

Cortez Masto, a Democrat seeking her second term in the Senate, is viewed favorably by 52% of voters. Although she lost 16 of the state’s 17 counties in 2016, the 58-year-old carried Clark County – where 70% of state residents live.

Cortez Masto was ranked the most vulnerable Democrat in the Senate ahead of the midterm election, adding to the competitive nature of the race.

During this campaign, Cortez Masto has focused on abortion access and reproductive health care. She was endorsed by Planned Parenthood Action Fund, the organization’s political arm, as well as EMILY’s List, the Democratic PAC that backs female candidates who advocate for abortion access.

“I stand with the vast majority of Nevadans who believe the government shouldn’t tell women what to do with their own bodies, and I have always fought to uphold a woman’s right to choose,” she told the Reno Gazette Journal.”My opponent, Adam Laxalt, has worked to roll back women’s rights throughout his career, making it clear where he stands on this issue.”

The candidates have some commonalities. Cortez Masto also was also Nevada’s Attorney General, serving from 2007 to 2015.

Laxalt is considered favorable by 52% of voters. After his time as Attorney General, the Republican previously lost a bid for governor in 2018. His current campaign message focuses on the heavy burden of high inflation, a promise to reduce federal spending, and intense opposition to the Green New Deal.

Former Hawaii Congresswoman Tulsi Gabbard, who recently announced she is no longer a Democrat, went to Nevada to support Laxalt.

“Adam Laxalt needs to be that 51st senator that allows us, the American people, you the people of Nevada, to have a check on the power that this administration is abusing, that is harming us as people in this country,” Gabbard said at an event in Las Vegas on Oct. 28.

“If we’re pissed off about the direction that we are headed, if we are angered by how far and quickly our country has spiraled downward over the last two years, don’t just complain about it. Take action,” she added, per the Las Vegas Review-Journal. “We have a responsibility to take ownership of our country and our future.”

A New York Times-Sienna College Poll found that 48% of those surveyed want Republicans to take control of Congress while 44% want Congress to be controlled by Democrats.

The U.S. Senate is currently split 50-50 between the two parties, with Vice President Kamala Harris holding the tie-breaking vote. 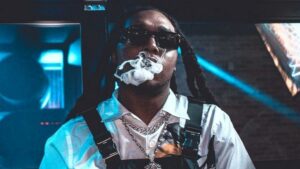