Nearly eight in ten Americans believe that violent crime is a major problem in the United States.

The new Politico-Morning Consult poll was looking at where Americans stand on the issue ahead of November’s midterm election.

According to the poll, 77 percent of Americans believe violent crime is a major problem, 17 percent believe it is a minor problem, and only two percent say it is not a problem at all.

The survey also found that 74 percent of Americans believe violent crime is on the rise, and just 18 percent believe that it is staying the same.

“While violent crime in 2021 overall fell 1 percent compared to 2020, homicides rose 4.3 percent from 2020, which was a year that saw a rise of nearly 30 percent from 2019 levels,” The Hill reports. “Republicans have seized on the issue, along with inflation and securing the border, ahead of the midterm elections.”

When it comes to how to solve the issue, 44 percent of Americans said that they trust Republicans in Congress to tackle it, while 37 percent said that they believe Democrats are better suited to handle it.

“Thinking about the upcoming November 2022 midterm elections for U.S. Congress, do you expect that candidates’ views on each of the following will play a major or minor role in deciding who you vote for, or do you expect they will not play a role at all?” the pollsters asked.

The pollsters also found that 50 percent of Americans believe that efforts to defund the police played a role in the current violent crime rates.

The Politico-Morning Consult poll was conducted Sept. 30-Oct. 2 among more than 2,000 registered voters. The margin of error is plus or minus 2 percentage points. Morning Consult describes itself as “a global data intelligence company, delivering insights on what people think in real time by surveying tens of thousands across the globe every single day.” 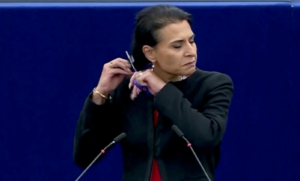