University of Kentucky swimmer Riley Gaines, who tied with Lia Thomas for fifth place in the 200-yard freestyle NCAA championships last month, spoke out about competing against the transgender swimmer.

On Wednesday night, she told Fox News’s Tucker Carlson that many of her fellow swimmers have been instructed “that they’re not allowed to talk about it.”

Thomas competed in the NCAA championships under the proper rules, which required her to complete one year of hormone therapy in order to compete in the gender category with which she identifies.

However, Gaines said that she and others feel the NCAA has handled the situation poorly.

Gaines claimed a number of her fellow NCAA competitors told her that “their athletic directors, their media people, and their coaches or other outside influencers have told them ‘don’t say anything, just avoid the situation.'”

“I know I can’t speak for everyone, but I’m almost certain that I’m speaking for a large majority of female athletes, and this is just not okay. And it’s not fair,” Gaines said.

She told Carlson she wanted to lend a voice to those who felt they were unable to share their thoughts about Thomas and the competition.

Gaines went on to say that she felt the entire situation was “out of our control when we’re racing biological males whether they have different lung capacities, their height, testosterone levels whether they’ve used testosterone blockers are not.”

Ultimately Gaines said that allowing Thomas to compete in the women’s events was “completely unfair” and felt the injustice was a “matter of equity.”

Prior to the awards ceremony following Gaines’ tie with Thomas, NCAA officials told her the trophy would be given to Thomas for a photo opportunity. The officials said the sports organization would mail Gaines’ trophy to her.

She said she was allowed to hold the 6th place trophy as part of the photo opportunity following the swimming event.

The University of Kentucky swimmer told Carlson that when other swimmers heard the officials tell her their plans, they were shocked, but they did not speak up because Thomas was present.

She said that the NCAA officials were unprepared for the circumstance, but in that moment, “they protected such a small minority.”

Thomas is the first transgender athlete to win the NCAA championship. Her involvement has caused controversy after being allowed to compete with women, having only taken one year of testosterone-suppression treatment to meet the organization’s current requirements.

Starting next year, NCAA requirements will change. Transgender females will be required to undergo three years of testosterone suppression to compete against biological women. However, officials did not make a rule change this year in mid-season. 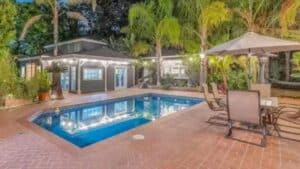