NASCAR has ordered Kyle Busch to attend sensitivity training before the start of the 2022 season.

During a race at Martinsville Speedway on Oct. 31, Busch was hit by Brad Keselowski while the driver attempted to pass him.

After the race, Kyle Busch called out Brad Keselowski for his move for second on the last lap.

BUT… if Alex Bowman were to fail post-race inspection, Kyle beat Brad for second and would get the win. #Championship4 #NASCAR pic.twitter.com/eF0sFr0qds

Busch tweeted an apology, saying “I used a word I should never use and I want to apologize for it.”

In one of my post-race interviews I used a word I should never use and I want to apologize for it.

NASCAR says Busch’s comments violated the terms of his contract and announced his punishment in a statement on Nov. 1.

According to the Special Olympics, the “R-word” is a slur that is considered hate speech.

“While ‘mental retardation’ was originally introduced as a medical term in 1961 for people with intellectual disabilities, in the decades since, the R-word has become an insult used all too commonly in everyday language,” the organization said. “Those who use the R-word often do so with little regard for the pain it causes people with intellectual disabilities — and the exclusion it perpetuates in our society.”

According to Fox News, “neither playoff driver was in position to advance to the Championship 4 at Sunday’s final in Phoenix, but a second-place finish would’ve put Busch through if race winner Alex Bowman had been penalized for any infractions during the post-race inspection.”

The 37-year-old is a two-time series champion. He is at least the second driver NASCAR has required to undergo sensitivity training.

Hailie Deegan, a 19-year-old NASCAR driver, used the word last year during a livestream of a simulated race on Twitch.

Deegan said, “Who’s the retard behind me?”

She later apologized, saying “It was inappropriate slang and a stupid thing to do.”

“I apologize to everyone who was offended by it,” Deegan said. “There’s no excuse for it, and I know I have to do better for my sponsors and my fans.”

Editor’s Note: A previous version of this article incorrectly stated that the 2022 season begins this summer. The mistake has been corrected. 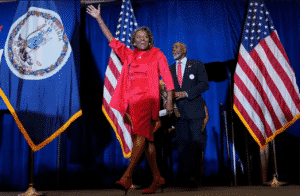