House Speaker Nancy Pelosi is attempting to distance the Democratic Party from the Defund the Police movement.

While the movement and slogan gained some traction during the George Floyd riots in 2020, support for efforts to handicap police departments dropped sharply in 2021 and has continued to decline.

Speaking to ABC’s George Stephanopoulos on Sunday, Pelosi responded to Rep. Cori Bush, who has been criticizing the party for not doing more to support the movement.

“‘Defund the police’ is not the problem,” Bush said during a call with all black reporters last week, according to a report from Axios. “We dangled the carrot in front of people’s faces and said we can get it done and that Democrats deliver, when we haven’t totally delivered.”

Rep. Bush added, “If [Republicans] take the majority, it’s just done as far as trying to get the legislation across.”

Responding to Bush, Pelosi asserted that the party must stand for “community safety.”

.@SpeakerPelosi says “defund the police” is “not the position of the Democratic Party” as lawmakers remains split over how to address crime.

“Community safety, to protect and defend in every way, is our oath of office.” https://t.co/SLZ2iqASNG pic.twitter.com/qP0e30tRkA

“Well, with all the respect in the world for Cori Bush, that is not the position of the Democratic Party,” Pelosi said. “Community safety, to protect and defend in every way, is our oath of office.”

Pelosi declared that the movement is “dead,” but noted that she does believe that there is a need for reforms.

“I quote one of my colleagues from New York, Ritchie Torres, a brand new member of Congress way on the left, saying that ‘defund the police’ is dead,” Pelosi said. “That causes a concern with a few in our caucus. But public safety is our responsibility.”

According to a Politico/Morning Consult poll released on Wednesday, three out of four Americans say that “the defunding of police departments” is “a reason that violent crime is increasing in the United States.”

“The poll also found that two-thirds of those surveyed believe increasing funding for police would reduce crime — a key data point as lawmakers and local officials grapple with the rising violent crime rates alongside calls to ‘defund the police,'” the Santa Barbara News-Press reported. “The poll asked respondents whether increasing funding for police departments ​​’would decrease the rate of violent crime in the United States.’ Only 22% of those surveyed said it would not while the majority said it would. The poll found 36% said it would decrease crime “a lot” while 33% said more police funding would decrease crime ‘some.'”

President Joe Biden has also distanced himself from the radical agenda, saying during a trip to New York City last week that defunding police departments “is not the answer.” 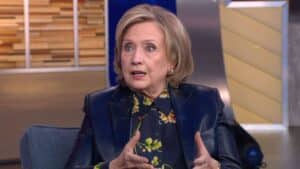