A newly released poll has found that more than a quarter of Americans believe that it may “soon be necessary to take up arms” against the United States government.

The poll was released on June 30, by the University of Chicago’s Institute of Politics (IOP).

According to their findings, 28 percent of voters, including 37 percent who have guns in their homes, agree that “it may be necessary at some point soon for citizens to take up arms against the government.”

“That view is held by one in three Republicans, including 45 percent of self-identified strong Republicans. Roughly one in three (35 percent) Independent voters and one in five Democrats agreed,” the pollsters reported.

While neither party trusts the government, they also do not trust members of the opposite party.

The pollsters reported, “about three-quarters (73 percent) of voters who identify themselves as Republican agree that ‘Democrats are generally bullies who want to impose their political beliefs on those who disagree.’ An almost identical percentage of Democrats (74 percent) express that view of Republicans. A similarly lopsided majority of each party holds that members of the other are ‘generally untruthful and are pushing disinformation.'”

Nearly half of Americans (49 percent) said that they “more and more feel like a stranger in my own country.” While this sentiment was expressed by 69 percent of strong Republicans and 65 percent of the people calling themselves “very conservative” — a sizable 38 percent of strong Democrats agreed.

Nearly half (49 percent) of the respondents said that they have “avoided political discussions with others because I don’t know where they stand.”

The polarization is also impacting relationships between friends, relatives, and even brands.

The survey of 1,000 registered voters was conducted in May by Republican pollster Neil Newhouse and Democratic pollster Joel Benenson.

“While we’ve documented for years the partisan polarization in the country, these poll results are perhaps the starkest evidence of the deep divisions in partisan attitudes rippling through the country,” said Newhouse. 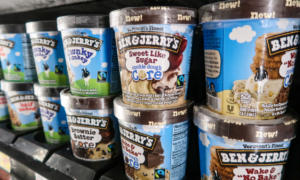