Over one million voters across 43 states have left the Democratic Party and joined the Republican Party over the last year, according to voter registration data analyzed by the Associated Press.

The shift is most prominent in the suburbs, where swing voters who supported Biden are grappling with 40-year-high inflation, record-high gas prices, skyrocketing crime and the Democratic Party’s focus on racial equity.

“It’s more so a rejection of the left than embracing the right,” said Ben Smith, a 37-year-old professional counselor.

With 134 days until the midterm elections, no outcome is guaranteed. But, the new data is a fresh warning to Democrats who have already seen signs of major potential losses this November. Some of those warnings have come from within their own Party.

“I support the president’s efforts, but we need a bolder vision and faster action,” Rep. Ro Khanna (D-CA) wrote in a recent op-ed.

Michael Stratton, a Democratic strategist, told the Daily Mail Democrats “need to wake up here, [and] smell the coffee.”

“Trying to divert attention to unemployment numbers – that is not going to take away the average person’s concern about inflation,” said Chad Campbell, an Arizona-based Democratic strategist. “When you’re paying five and [a] half dollars for a gallon of gas, it doesn’t matter what your job is – it’s expensive.”

State legislators have recently called on President Biden to reverse course on his environmental policies, which are constraining domestic energy production as part of his climate agenda.

“We urge you and your administration to reject any well-intentioned but misguided calls to curtail American crude oil and/or petroleum exports in reaction to the high gasoline and diesel prices currently seen at the pump,” a group of Texas Democrats wrote in a new letter to Biden. “As you know, domestic gasoline prices are set by an international benchmark (Brent), and restricting US crude exports would lower global supply and increase costs here at home.”

The voter roll analysis from the AP is consistent with other recent data showing that inflation and the economy are the top concerns for U.S. voters and 75 percent of Americans are struggling with inflation.

Though the administration recently blamed oil companies for higher gas prices and begged oil executives to cut prices, the Biden administration still has not publicly stated any real plan to address domestic energy production, his cratering polling numbers or the nation’s ballooning inflation.

“Biden and Democrats are woefully out of touch with the American people, and that’s why voters are flocking to the Republican Party in droves,” RNC Chair Ronna McDaniel told the AP. She predicted that “American suburbs will trend red for cycles to come” because of “Biden’s gas hike, the open border crisis, baby formula shortage and rising crime.”

Thus far, the Democratic National Committee has declined to publicly comment on the issue. 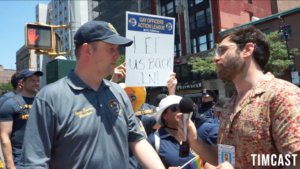