The mother of a Marine killed in the suicide bombing in Kabul, Afghanistan, had her Instagram account “incorrectly deleted” following posts that criticized President Biden after his administration’s withdrawal from Afghanistan.

“It seems Instagram took it upon themselves to delete my account because … i [sic] gained so many followers over my sons [sic] death due to Biden’s negligence, ignorance and him being a traitor,” she wrote. “I’m gonna assume that Facebook is gonna delete me next! Funny how these leftist one sided pieces of crap don’t want the truth to come out!”

“Keep in mind i [sic] only posted about my heart break over my son,” she continued. “Those of u who follow me on IG seen the post. My post was even shared on the news and now IG has disabled my account because of that post! Guess today I’ll accept those interviews from newsmax,fox,etc [sic] … Instagram you can not [sic] silence me!!! You deleted my account because my sons [sic] blood is on Biden’s hands!! 13 Heros [sic] blood is on Biden’s hands!!!! #instagram”

An Instagram spokeswoman responded to the situation, saying, “We express our deepest condolences to Ms. Chappell and her family. Her tribute to her heroic son does not violate any of our policies. While the post was not removed, her account was incorrectly deleted and we have since restored it.”

The New York Times described Chappell’s post before it was deleted by Instagram. The post had a picture of her son Kareem Nikoui at Kabul Airport, where the suicide bombing took place.

The New York Times reported, “On Friday, Kareem Nikoui’s mother, Shana Chappell, posted a photo on her Instagram account of her son with a broad smile, cradling his rifle amid the crowds of civilians and razor wire at the gate of the airport in Kabul. ‘This is the last picture my son sent me of himself. It was taken on Sunday. I know i am still in shock right now. I felt my soul leave my body as i was screaming that it can’t be true! No mother, no parent should ever have to hear that their child is gone,’ she wrote in the post.”

“President Joe Biden Joe Biden This msg is for you! I know my face is etched into your brain! I was able to look you straight in the eyes yesterday and have words with you,” she wrote. “After i [sic] lay my son to rest you will be seeing me again! Remember I [sic] am the one who stood 5 inches from your face and was letting you know I [sic] would never get to hug my son again, hear his laugh and then you tried to interrupt me and give me your own sob story and I [sic] had to tell you ‘that this isn’t about you so don’t make it about you!!!’” 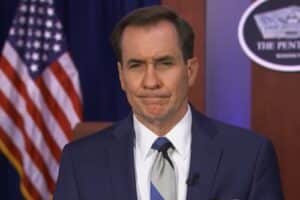 Pentagon Downplays Americans Being Stranded in Afghanistan, Says Our Citizens ‘Get Stranded in Countries All The Time’