Moderna CEO Stephane Bancel appears to have deleted his Twitter account as the sale of his stock comes under scrutiny.

His Twitter page, twitter.com/sbancel, notes that the account does not exist. It appears to have been removed around Feb. 11. Moderna had linked to the CEO using the @sbancel handle in Nov. 15 post.

Congratulations to our CEO, @sbancel, for being awarded the Strategist Prize 2020 by @LesEchos for leading Moderna's #COVID19 vaccine strategy, deemed as the most relevant industrial strategy of the past year. pic.twitter.com/g4iNh5SQwM

In its reporting, Heavy found that Bancel had used the account but was relatively inactive since April 2019. The outlet was also able to verify that Bancel’s handle had not been changed.

Bancel’s unexplained departure from Twitter follows the periodic sale of his stock in Moderna.

Financial records indicate Bancel has sold 9,000 to 19,0000 shares of Moderna several times a month since late 2019. He owns roughly 21.8 million shares of the company’s stock which is valued at $3.5 billion. The French businessman is Moderna’s largest insider shareholder.

Quartz notes that the sales are part of the CEO’s previously established plan to sell his stock over time, which he last modified in May of 2021.

“At this rate it would take Bancel 16 years to sell all of his shares,” per Quartz.

There was previous speculation that Bancel’s stock sales in the middle of the pandemic were made with insider information. The executive sold $38 million of stock sales between January and August of 2020, a period when the company announced positive progress in developing a COVID-19 vaccine.

Bancel’s exit from Twitter appears to have come after former Blackrock executive Edward Dowd launched an investigation into death statistics from funeral homes and insurance companies. Dowd has accused Moderna and Pfizer of committing fraud during their vaccine clinical trials.

Moderna has not publicly commented on the CEO’s deleted Twitter account or confirmed a rumor that Bancel has plans to leave the company.

The Massachusetts-based pharmaceutical company skyrocketed in value during COVID-19 — from $6.5 billion to over $65 billion. In August of 2021, Moderna’s value reached a high of $195 billion. 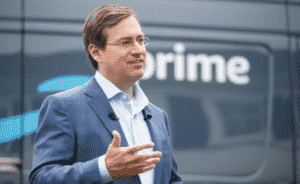