Senate Minority Leader Mitch McConnell is ranked as America’s least popular senator, according to a new poll from Morning Consult.

The biggest shift in voter sentiment was shown in the wake of Sinema’s switch from the Democrat Party to an independent, triggering a wave of anger from members of her former party who were already offended by her moderate stances and unwillingness to change the filibuster rule to advance the party’s controversial proposals.

Among Arizona Democrat voters, prior to Sinema’s party switch, her approval rating was at 42 percent, while 41 percent disapproved.

“Following Sinema’s Dec. 9 declaration that she was separating from the Democratic Party, her overall approval rating only moved marginally,” Morning Consult reported. “But among Democrats in her state, whose national apparatus helped her flip a seat in the 2018 midterm elections, Sinema’s disapproval rating climbed 18 percentage points, to 59 percent.”

Sinema’s support among independent voters jumped 13 points after her party switch, while her approval rating among Republicans increased five points.

“Should Sinema seek re-election as an independent next year, political strategists in the state believe the weight of her new standing among Arizona Republicans and independents — a handy asset — will likely come down to whether the state GOP elevates a candidate with broader appeal or reaches for the extreme as it did with nominees for statewide offices such as governor and Senate in 2022,” according to Morning Consult.

Among the U.S.’s more popular (non-retired) senators are:

Morning Consult’s survey data shows that among Democrats, Manchin is the weakest with his party’s voters, though he is unlikely to face a serious primary challenge.

As far as Republicans, “Only Sen. Mitt Romney (R-Utah), the GOP’s 2012 presidential nominee who voted twice to convict then-President Donald Trump during his impeachment trials, looks in trouble on the right,” Morning Consult says. 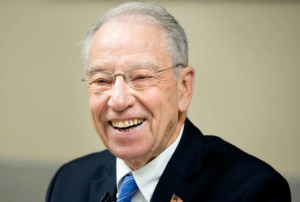