MISSING IN ACTION: NSA Says Biden Hasn’t Spoken with Any World Leaders Since Fall of Kabul

Joe Biden’s National Security Advisor Jake Sullivan confirmed that the President has not spoken with any world leaders since the Taliban seized control of Kabul over the weekend.

“He has not yet spoken with any other world leaders,” Sullivan told reporters during a press briefing Tuesday. “Right now, the main issue is an operational issue. It’s about how we coordinate with them to help them get their people out. And we are operating through logistical channels and policy channels to try and make that happen.”

“We believe our commitment to our allies and partners are sacrosanct, as they always have been,” Sullivan added.

President Biden's National Security Advisor Jake Sullivan told reporters that President Biden has not yet spoken to any other world leaders since Kabul fell. pic.twitter.com/KKmn8Q8NF1

“When I came into office, I inherited a deal that President Trump negotiated with the Taliban,” Biden said. “Under his agreement, U.S. forces would be out of Afghanistan by May 1, 2021, just a little over three months after I took office. U.S. forces had already drawn down during the Trump administration from roughly 15,500 American forces to 2,500 troops in country. And the Taliban was at its strongest militarily since 2001.”

“Over the coming days we intend to transport out thousands of American citizens who have been living and working in Afghanistan. We’ll also continue to support the safe departure of civilian personnel — the civilian personnel of our allies who are still serving in Afghanistan. Operation Allies Refuge, which I announced back in July, has already moved 2,000 Afghans who are eligible for special immigration visas and their families to the United States. In the coming days, the U.S. military will provide assistance to move more S.I.V.-eligible Afghans and their families out of Afghanistan,” he added. 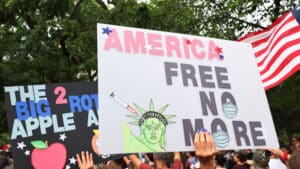 One response to “MISSING IN ACTION: NSA Says Biden Hasn’t Spoken with Any World Leaders Since Fall of Kabul”