Disneyland Paris announced it will commemorate its upcoming 30th anniversary by dressing Minnie Mouse in a power suit.

The iconic Disney character is known for sporting a red bow, a red and white polka dot dress, and yellow heels.

In its Jan. 25 announcement on Twitter, the theme park said she will wear a pantsuit designed by British fashion designer Stella McCartney.

The park shared an image of Minnie’s new outfit – a blue and black blazer and trousers that still featured a polka dot print.

In an interview with the official Disney fan club D23, McCartney said she was “delighted” to design a custom outfit for the character as part of the celebration.

“Minnie has always had a special place in my heart. We share the same values,” the 50-year-old designer said. “What I love about Minnie is the fact that she embodies happiness, self-expression, authenticity, and that she inspires people of all ages around the world. Plus, she has such great style!”

“I wanted Minnie to wear her very first pantsuit at Disneyland Paris, so I have designed one of my iconic costumes—a blue tuxedo—using responsibly sourced fabrics,” McCartney added. “This new take on her signature polka dots makes Minnie Mouse a symbol of progress for a new generation.”

Minnie Mouse will wear the new look in honor of Women’s History Month during March 2022.

McCartney has also designed a Minnie Mouse t-shirt as part of International Women’s Rights Day. The item will be exclusively sold in Stella stores and online on March 8, 2022.

Minnie Mouse will wear a dress for certain occasions, including a shiny pink dress designed for the “Mickey, Minnie & Friends” show during the park’s anniversary celebration.

The announcement was not universally applauded. American commentator Candace Owens said Minnie’s outfit was an attempt by Disney to distract from real issues plaguing people, including inflation and economic turmoil.

“This is why people don’t take these people seriously,” she said while appearing on Jesse Watters Prime Time on Jan. 26. “They’re taking all of these things that nobody was offended by. It’s like they have to get rid of them and destroy them because they’re bored. You know, they’re absolutely bored.”

Disneyland Paris first opened to the public on April 12, 1992. More than 372 million people have visited the park. 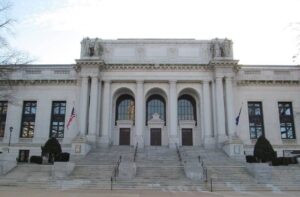