A non-profit organization is partnering with Microsoft to repurpose more than 2,400 coal-fired power plants and turn them into nuclear power plants.

TerraPraxis and Microsoft have announced they will collaborate on a software application to examine coal plants and analyze them to determine efficient ways for owners to decarbonize them.

The streamlined process the new platform creates is projected to save plant owners time and money, accelerating the deployment of clean, nuclear power.

“We are thrilled to see Microsoft enable the Repowering Coal Initiative and help deliver a fast, low-cost, and repeatable strategy to repower hundreds of coal plants that would otherwise continue to produce large quantities of emissions,” Kirsty Gogan, Co-Founder and Managing Director at TerraPraxis said in a statement.

The U.S. government considers nuclear the largest source of clean power in the nation, producing more than half of the country’s emissions-free electricity. The Energy Department says this avoids more than 470 million metric tons of carbon each year, which they say is the equivalent of “removing 100 million cars off of the road.”

TerraPraxis and Microsoft say they will create a suite of tools that automate the design and regulatory approval process for nuclear power plants, allowing more plants to come online faster.

“Our work with Microsoft will accelerate the clean energy benefits that Repowering Coal will bring to each community while simultaneously initiating hundreds of projects by leveraging Microsoft’s unparalleled digital capability and global market scale,” said Eric Ingersoll, Co-Founder and Managing Director.

National electricity consumption is projected to increase by as much as 38 percent by 2050, largely because of consumers owning more electric vehicles. Amid concerns of strains on the nation’s power grid, expanding nuclear power plants would accommodate Americans scaling up electricity usage, while also being environmentally sustainable.

Additionally, unlike other clean energy sources like solar, and wind, nuclear power plants can produce energy 24 hours a day.

“Nuclear is beautiful because its tiny land use and lifecycle footprint protects nature and delivers civilisation-scale, abundant clean energy,” Gogan said. “Both of these are fundamental to our future health, well-being and prosperity on this planet.” 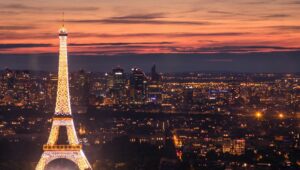 France Preps For Winter Energy Crisis, May Cut Off Electricity For Two Hours A Day