McDonalds Is Exiting Russia After More than 30 years

Due to the company's values, the CEO said they could 'no longer keep the Arches shining there'

After more than 30 years of business inside Russia, McDonald’s is calling it quits, citing humanitarian concerns after the invasion of Ukraine.

In a statement released by the company on Monday, the fast-food giant informed investors and customers of its decision.

“The humanitarian crisis caused by the war in Ukraine, and the precipitating unpredictable operating environment, have led McDonald’s to conclude that continued ownership of the business in Russia is no longer tenable, nor is it consistent with McDonald’s values,” the company said.

The leadership said that the company was “pursuing the sale of its entire portfolio of McDonald’s restaurants in Russia to a local buyer.”

Also, the company noted that it continued to pay the salaries for the thousands of employees inside of Russia. While they did not indicate how long they would continue, the statement noted the company’s continued efforts to support the Russian employees. They said they would “ensure the employees of McDonald’s Russia continue to be paid until the close of any transaction.”

McDonald’s did acknowledge the decision to exit the Russian market would come at a significant cost. According to their estimates, the loss would be roughly $1.2 to $1.4 billion.

In 1990, McDonald’s opened its first Russian location in Moscow. For many Russians, the opening of a McDonald’s restaurant symbolized the collapse of the Soviet Union.

Today, most McDonald’s locations in Russia are company-operated, but franchisees own more than 100. After Russia invaded Ukraine in February, the company decided to cease all operations until the end of the conflict. McDonald’s acknowledged a $100 million loss in inventory from closing down operations initially.

Chris Kempczinski, the company’s CEO, said Monday that the decision was “extremely difficult.” He noted the company had long held fast to the company values. As a result of those values, he said the company could “no longer keep the Arches shining there.”

The company’s statement noted that it would begin to “de-arch” the Russian location, meaning they will no longer use the McDonald’s name, logo, or branding. 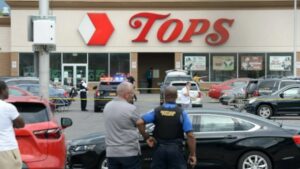 Mass Shootings In New York, California, Illinois and Texas Over the Weekend