At a campaign event in Manassas on Oct. 31, Democrat gubernatorial candidate Terry McAuliffe lamented how many white teachers Virginia has.

“We got to work hard to diversify our teacher base,” he told the audience. “Fifty percent of our students are students of color, 80% of the teachers are white, so what I’m going to do for you, we’ll be the first state in America. If you go teach in Virginia for five years in a high-demand area — that could be geographic, it could be course work — we will pay room, board, tuition, any college, any university, or any HBCU [historically black college or university] here in Virginia.”

McAuliffe included “addressing modern-day segregation” in his campaign platform. He intends to add a school integration officer within the Virginia Department of Education and to “improve access to affordable housing” so families can relocate to areas with high-performing schools.

According to Fox News, “McAuliffe’s reference to historically Black colleges and universities and his framing the program as intended to address this racial disparity suggest that he intends to use the program as a kind of affirmative action, prioritizing non-White prospective teachers.”

Glenn Youngkin, the Republican challenger, replied by reviewing another one of the Democrat’s promises: raising teacher pay.

“Forty-three-year career politician Terry McAuliffe failed to keep his promises to raise teacher pay to the national average the first time he ran for governor, so now he’s trying to scare teachers by lying about Glenn Youngkin’s education plan,” a campaign spokesman told Fox News. “Unlike McAuliffe, Youngkin will keep his promise to raise teacher pay and propose the largest education budget in Virginia history.”

Education has loomed over the Virginia governor race for months.

Youngkin and McAuliffe have clashed over Critical Race Theory, book banning, and parents’ role in education throughout the campaign, notes Newsweek.

President Donald Trump has thrown his support behind Youngkin and is set to host a virtual campaign event for him on Nov. 1. Trump called the Republican a “good man, a hardworking man, a successful man” who “loves Virginia.”

“Terry McAuliffe is a low-life politician who lies, cheats, and steals,” Trump added. “He was a terrible high-tax governor and would be, if elected, an even worse governor again.”

McAuliffe served as the governor of Virginia from 2014 to 2018. Current President Joe Biden has spoken out on his behalf and criticized Youngkin’s connection to Trump.

At a campaign event last week, Biden said “Well, just remember this: I ran against Donald Trump. And Terry is running against an acolyte of Donald Trump.”

McAuliffe has fallen in recent polls, creating a tight race that culminates on Nov. 2.

A FiveThirtyEight poll indicated Youngkin pulled ahead of McAuliffe among voters on Oct. 28. As of November, the poll shows the Republican in a narrow one-point lead — 47.7% to 46.7%. 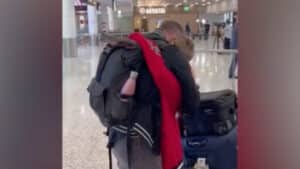