City workers have been under a vaccine mandate since November.

Appearing on ABC’s “This Week” on Sunday, one day after he was sworn in, Adams announced that the city would be examining the numbers to determine if he believes a booster mandate is the right course of action.

“If we feel we have to get to the place of making that mandatory, we’re willing to do that, but we’re encouraging them to do that now,” the mayor said.

The new mayor also urged those who are not vaccinated to “stop it.”

Adams said that while COVID cases are skyrocketing in the Big Apple, the economic ramifications of shutting down the city are “as dangerous” as the virus.

“If we close down our city, it is as dangerous as COVID,” Adams stated. “That’s what our focus must be. So that proper balance of safety [and] keeping our economy operated is going to allow us to get through.”

On his first day in office, Adams signed executive orders continuing the existing state of emergency put in place by former Mayor Bill de Blasio and extending the “Key to the City” order, which requires a vaccine passport for most indoor settings — including dining.

This is great news… if you own real estate in Texas or Florida.

The New York Post reports, “Currently, about 82 percent of Big Apple residents have received at least one dose of a coronavirus immunization, including just under 93 percent of adults, according to city data. As of late December, records showed that just 40 percent of eligible New Yorkers have gotten that extra dose.” 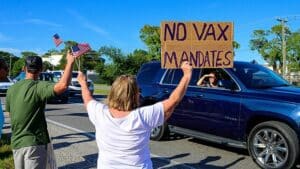