The new Barbie was released as part of the Barbie Tribute Collection which has honors “visionaries whose incredible contributions have helped shape and impact culture.” Other honorees included actress and producer Lucille Ball and fashion designer Vera Wang.

“I can’t wait for fans to find my doll on shelves and have the opportunity to add a Barbie doll modeled after a transgender person to their collection,” Cox said in a statement, per Page Six. “I hope that people can look at this Barbie and dream big like I have in my career.”

Cox gained a national audience after appearing on Netflix’s “Orange Is the New Black” as Sophia Burset, a transgender woman who is convicted of credit card fraud. Cox is also known as an advocate for LGBT issues.

“As a four-time Emmy-nominated actress, Emmy-winning producer, and the first transgender woman of color to have a leading role on a scripted TV show, Laverne Cox uses her voice to amplify the message of moving beyond societal expectations to live more authentically,” Mattel wrote of the new Barbie, which was released on May 25.

The doll wears a silver metallic bodysuit under a sheer red tulle ball gown with a dark red bodice. The company described the doll’s body type as “Articulated – Superhero.”

INBOX: Toy giant Mattel launches the first transgender Barbie doll designed in the image of Laverne Cox, the transgender star of the US prison comedy-drama Orange is the New Black. pic.twitter.com/Xb0Ht35GFI

During an appearance on the Today Show, Cox recounted experiencing “a lot of shame and trauma” after being prohibited from playing with Barbies as a child.

A therapist once encouraged Cox to buy a Barbie as an adult, saying “there’s a little kid that lives inside of you.”

Cox’s mother eventually gifted the performer a Barbie as a Christmas gift after a breakthrough in therapy.

“I hope all the kids who are feeling stigmatized when their health care is being jeopardized, ability to play sports, I hope they can see this Barbie and feel a sense of hope and possibility,” Cox said. “If they don’t see themselves in this Barbie I hope they know that they can create spaces where they do see themselves.”

In addition to the new transgender Barbie, Mattel also offers its Inspiring Women Series. The Series “pays tribute to incredible heroines of their time… who took risks, changed rules and paved the way for generations of girls.” It features dolls made in the likeness of civil rights activist  Ida B. Wells, former First Lady Eleanor Roosevelt, and tennis player Billie Jean King.

Cox’s Barbie is on sale online, at Walmart, or at Target for $40. 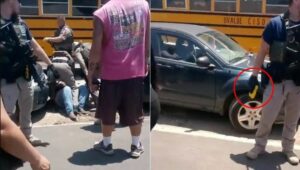 Opinion: The 'Not As I Do' Uvalde Officer?