Mass Shootings In New York, California, Illinois and Texas Over the Weekend

The weekend included four incidents of intense gun violence, claiming at least 14 lives and wounding many others.

On Saturday, an 18-year-old suspect made a more than three-hour drive to the city of Buffalo, New York, to carry out what officials are calling a hate crime. The suspect, Payton Graydon, from western New York, drove to a Tops grocery store where he opened fire, using an AR-15, killing ten people and wounding four others.

“It is my sincere hope that this individual, this white supremacist who just perpetrated a hate crime on an innocent community, will spend the rest of his days behind bars. And heaven help him in the next world as well,” said Gov. Kathy Hochul, according to AP News.

Twitch, a popular live-streaming platform, confirmed that the suspect used its platform to stream a live broadcast during the attack. It has since removed the video and is monitoring to ensure other sources do not repost the content. The company sent condolences to the victims and their families.

Twitch’s statement regarding the live-stream of the shooting: pic.twitter.com/Q5125E7lJm

The suspect was charged with first-degree murder and arraigned late Saturday. The suspect’s next court appearance is scheduled for Thursday at 9:30 am. ET

Buffalo’s Mayor, Byron Brown, told local media that Saturday’s shooting is “the worst nightmare that any community can face, and we are hurting, and we are seething right now.”

On Friday, Chicago saw multiple shootings downtown. The incidents took place in the popular tourist locations of the Loop and near The Bean in Millennium Park. The shootings claimed the life of a 16-year-old male and left two others wounded.

Chicago Mayor Lori Lightfoot enacted a curfew in the area any unaccompanied minors that began Saturday at 6 pm.

“We, as a City, can not allow any of our public spaces to become platforms for danger,” said Lightfoot. “Anyone coming into our public spaces should expect to enjoy them peacefully and must respect and exhibit basic community norms of decency. We simply will not accept anything less.”

On Sunday, just outside of Houston, Texas, in Harris County, an altercation at a local flea market turned deadly.

According to a report by ABC News, an altercation between two parties resulted in violence when gunfire was exchanged. The event left two people dead and three others wounded.

“For now, it appears the wounded were all likely participants in the altercation, no innocent bystanders injured as far as we know,” Sheriff Ed Gonzalez said. “At least 2 pistols recovered, multiple shots fired.”

In Southern California on Sunday, a shooting at a local church left one dead and four others wounded.

Authorities detained a gunman at the Geneva Presbyterian Church in Laguna Woods, California, 50 miles southeast of downtown Los Angeles. The shooting took place while a few dozen congregants were inside the building.

“All victims are adults and are enroute to the hospital,” the Orange County Sheriff’s Department said in a tweet. “One victim is deceased at the scene.” Another person has minor injuries, according to the tweet.

Dispatch received call of a shooting inside Geneva Presbyterian Church at 1:26pm. Four victims have been critically wounded , one with minor injuries. All victims are adults and are enroute to the hospital. One victim is deceased at the scene.

These particular events took the lives of 14 individuals, leaving at least 11 others wounded. While none of these events are linked, they continue to fuel a conversation on gun violence and rights.

President Joe Biden is scheduled to travel to Buffalo, New York, on Tuesday to meet with the families of the victims of Saturday’s shooting. 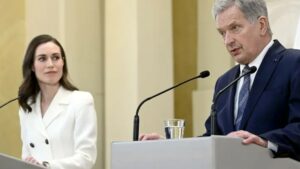 Finland Announces It Will Join NATO