Man Who Removed Pelosi’s Podium From House on Jan. 6 Sentenced to 75 days in Jail

The Florida man who was photographed removing the Speaker of the House’s podium on Jan. 6 was sentenced to 75 days in jail.

Adam Johnson was part of the group of protestors who enter the United States Capitol during a security breach on the day the 2020 electoral votes were set to be certified.

The 37-year-old father of five pled guilty to entering and remaining in a restricted building or grounds. In addition to his incarceration, he will also be fined $5,000.

The U.S. Justice Department was seeking a 90-day sentence for Johnson. The department argued he “witnessed rioters attempt to break down the doors to the House chamber and encouraged them to do so by shouting that a bust of George Washington would make ‘a great battering ram.’”

Johnson’s attorney argued he received more attention than other people involved in the breach because the lectern is used by Congresswoman Nancy Pelosi.

“Arguably, if he latched on to some other piece of government furniture for his photo opportunity, jail time would not even be a consideration,” his lawyer said.

While addressing the court, Johnson said he was ashamed of his actions and said he never intended to hurt Pelosi. He has said he took the podium “because he believed it would make a good prop for a picture.”

U.S. District Court Judge Reggie B. Walton said during sentencing that Johnson made “a mockery” of the security breach and had an active role in the events. He also questioned Johnson’s ability to be a good role model for his children.

“We’re on a dangerous slide in America,” Walton said, equating Jan. 6 to something he would expect to “see in banana republics.”

“The 2020 BLM riots injured or blinded more than 2,000 police officers, resulted in the deaths of more than two dozen people and property damage worth more than $1 billion, the most expensive in insurance history,” Devine wrote. “But according to the Democrats, their pet media outlets and a disturbing number of judges, the violent mayhem was morally justified, and so the vast majority of charges have been dismissed.”

Over 700 people have been charged for their involvement in the events of Jan. 6, per The Guardian.

NBC News reports that more than 2,500 people were “engaged in chargeable criminal conduct that day.”

At least 200 people have pled guilty to misdemeanor offenses in connection with Jan. 6 and at least 40 have been incarcerated.

Robert Scott Plamer of Maryland has received the longest sentence — five years in federal prison — for hitting a Capitol police officer with a fire extinguisher. 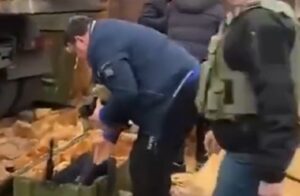 Ukraine Says They Have Supplied 18,000 Weapons to Citizens, Anti-Gun Leftists Celebrate Their Efforts