Majority of Voters Do Not Want Trump or Biden to Run in 2024, According to New Poll

A new poll shows voters are looking for new options ahead of the 2024 Presidential elections.

Conducted by Echelon Insights/Washington Examiner, the poll revealed only a third of registered voters would like either President Joe Biden or former President Donald Trump in the next election cycle.

The poll surveyed 1,016 registered voters between August 13 and August 18. The results found that not only do they not want Trump or Biden, but there is also no clear alternative front runner for either party.

Those polled were relatively politically engaged. About 81% said they were “extremely” or “very likely” to vote in the 2022 midterm elections.

Voters who identified themselves as Republican, or vote more regularly for Republicans than Democrats, were asked to say what stances were the most important to them.

“Putting America First” was the number one choice with a 46% selection rate. This was followed by “Protecting the Second Amendment and the rights of gun owners,” “Defending the police from defunding,” “Supporting low taxes for individuals and businesses,” and “Promoting traditional family values.”

The majority of those who identified themselves as Democrats, or who more regularly vote for Democrats over Republicans, described themselves as “Moderate Democrats.” The second-largest group, 26%, said they were “Bernie Sanders-style” Democrats.

The coronavirus pandemic (23%), Jobs and the economy (16%), and Immigration (11%) were rated the top three biggest issues facing America today.

“The poll also found that 54% believe the country is on the wrong track, compared to 39% who said it was moving in the right direction, usually a troubling indicator for an incumbent,” notes The Washington Examiner.

An NBC News poll found “fewer Americans support Biden’s handling of the coronavirus and the economy now than they did last spring, and just a quarter of respondents approve of his handling of Afghanistan.”

The poll also found that respondents have become more pessimistic regarding coronavirus over the summer. The news outlet described the past few months as the “summer of discontent” for the President. 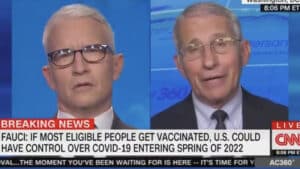 2 YEARS to SLOW THE SPREAD? Fauci Hopes to Have COVID Under Control by Spring of 2022

8 responses to “Majority of Voters Do Not Want Trump or Biden to Run in 2024, According to New Poll”