A 61 percent majority of Republicans want former President Donald Trump to run for re-election in 2024 — even if he is charged with a crime.

Just ten percent of Republican voters believe that the former president committed a crime and should be charged, according to a new NPR/PBS NewsHour/Marist National poll.

Across the political spectrum, “47% of Americans say Trump did something illegal or unethical and should be charged with a crime. 14% think he did something wrong but should not face criminal charges,” the poll’s findings continued.

While there is large majority support among Republicans for Trump running in 2024, when you look at the numbers across party lines, the majority do not want him to run — including nine out of ten Democrats.

“Former President Trump is losing the battle with public opinion over whether he did anything wrong by taking government documents to Mar-a-Lago,” said Lee M. Miringoff, Director of the Marist Institute for Public Opinion, in a statement. “But his core support remains intact regardless of the results of the investigation.”

Trump has not yet announced a bid for the presidency but has been consistently hinting that he does intend to challenge President Joe Biden.

The poll was conducted from August 29 through September 1, 2022. 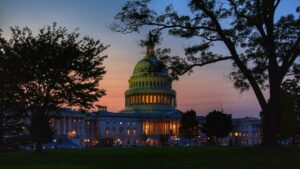 The Economist's Midterm Model Shows Republicans Have 74% Chance of Winning the House, Democrats have 78% Chance of Holding the Senate