The Maine House of Representatives blocked an effort to place a five-year mortarium on the statewide COVID-19 vaccine mandate.

The measure would have prohibited the state from implementing a mandate for five years following the federal government’s authorization of the COVID-19 vaccine for emergency use.

Republican Representative Tracy Quint proposed the bill. Advocates for the policy argued that the prohibition would give researchers more time to study the side effects and long-term consequences of getting the mRNA shot — specifically in terms of its impact on health and pregnancy.

Quint said the constituents had expressed concern about the vaccine’s safety.

“I feel that people that speak up against the COVID-19 vaccination are vilified and that’s not acceptable,” Quint said while speaking on the House floor. “As a nurse, it is not acceptable to vilify someone for not wanting medical treatment.”

Representative Patrick Corey said that, while he believes in the effectiveness of the vaccines and is fully vaccinated, he opposes mandates.

“I don’t want anyone else to speak for me today,” he said in his comment, per Bangor Daily News.

The proposal was reviewed by the Maine Legislature’s Committee on Health Coverage, Insurance and Financial Services in May of 2021.

The House voted 76-59 against the bill on Feb. 23. At least 13 lawmakers were not present and did not vote.

An amended version of the bill, which prohibited the state from mandating public employees and students get the vaccine, was advanced by Republicans to the Senate for consideration.

The vote came days after the United States Supreme Court chose not to hear a case arguing on behalf of healthcare workers in Maine who are seeking religious exemptions to the state’s vaccine mandate for their industry.

Just two other states in the country — New York and Rhode Island — do not allow healthcare workers to seek a religious exemption to COVID-19 vaccine mandates.

“Maine was one of the first states in the country to surpass the 50% threshold,” per Seacoastonline. Currently, 78% of the population is fully vaccinated.

COVID-19 hospitalizations have reached a three-month low, with fewer than 250 cases as of Feb. 23. Maine Center for Disease Control and Prevention Director Dr. Nirav Shah said in a statement that given the decreasing cases, health officials will meet next week to consider altering school mask requirements. 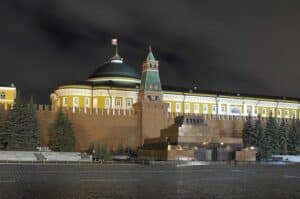 A Look at the Sanctions Imposed on Russia