Every New York Member of Congress from both the House and Senate called on Governor Andrew Cuomo to resign Tuesday after his Attorney General released a report showing he “sexually harassed multiple women.”

“As we have said before, the reported actions of the Governor were profoundly disturbing, inappropriate and completely unacceptable,” Senators Chuck Schumer (D-NY) and Kirsten Gillibrand (D-NY) said in a statement. “Today’s report from the New York State Attorney General substantiated and corroborated the allegations of the brave women who came forward to share their stories — and we commend the women for doing so.”

“No elected official is above the law,” Schumer and Gillibrand added. “The people of New York deserve better leadership in the governor’s office. We continue to believe that the Governor should resign.”

My statement on the results of the thorough and professional investigation conducted by Attorney General Tish James.

The time has come for Governor Andrew Cuomo to do the right thing for the people of New York State and resign.

No one is above the law. pic.twitter.com/9G7fED66N8

“My attorney, who is a non-political former federal prosecutor, has done a response to each allegation. And the facts are much different than what has been portrayed,” Cuomo said. “I want you to know directly from me that I never touched anyone inappropriately or made inappropriate sexual advances.”

“I do embrace people. I do hug people. Men and women,” Cuomo added. “On occasion I do slip and say sweetheart or darling or honey. I do banter with people. I do tell jokes, some better than others. I am the same person in public as I am in private.” 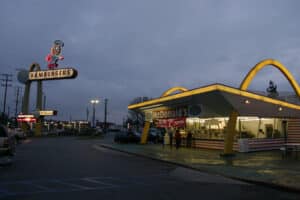 McDonald's is the Latest Major Retailer to Require Masks