A large 85 percent majority of Americans are concerned that the US will be drawn into the conflict between the Ukraine and Russia, according to a new poll.

The survey, conducted by the Associated Press and NORC Center for Public Affairs Research, found that only 11 percent of adults said they are “not very concerned” and four percent said that they are “not concerned at all.”

Additionally, a 55 percent majority said that “sanctioning Russia as effectively as possible, even if it damages the U.S. economy,” should be a priority.

“Close to half of Americans say they are very concerned that Russia would directly target the U.S. with nuclear weapons, and an additional 3 in 10 are somewhat concerned about that, according to the new poll,” the Associated Press reports. “Roughly 9 in 10 Americans are at least somewhat concerned that Putin might use a nuclear weapon against Ukraine, including about 6 in 10 who are very concerned.”

A 71 percent majority believe that the conflict has increased the risk of nuclear weapons being used anywhere in the world.

The poll was conducted between March 17 and March 21, nearly two months into the conflict — but prior to President Joe Biden’s trip to Poland over the weekend.

During his trip, Biden caused alarm globally when he told troops from the Army’s 82nd Airborne Division stationed in Rzeszów that they would be going to Ukraine.

The remark contradicted Biden’s repeated claims that the US would not be putting boots on the ground in the conflict.

The White House later corrected him, saying that “we are not sending U.S. troops to Ukraine and there is no change in that position.”

This would not be the last time the White House would have to correct hawkish statements from the president during the trip.

Speaking outside the Royal Castle in Warsaw on Saturday, Biden went off his planned script and concluded by saying that Russian President Vladimir Putin “cannot remain in power.”

The apparent call for regime change spread like wild fire across the news and social media.

The White House quickly set out to correct the president once again, claiming that he was not, in fact, calling for regime change.

French President Emmanuel Macron responded to Biden’s remarks by saying that he “wouldn’t use such words,” and warning against escalation. He noted that the goal is “achieving first a ceasefire and then the total withdrawal of [Russian] troops by diplomatic means.”

“If we want to do that, we can’t escalate, either in words or actions,” Macron asserted.

The survey, which polled 1,082 adults, has a margin of error of 4 percentage points. 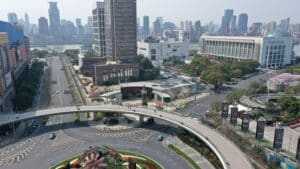 Shanghai Locked Down Due To COVID-19