The Los Angeles Police Protective League union, representing about 9,000 officers in the county, has blasted the move as pandering to anti-police activists.

LAPD Chief Michel Moore told Fox News on January 13 that “yesterday, we received a community complaint of the presence of a Blue Line Flag” with “the view that it symbolized support for violent extremist views, such as those represented by the Proud Boys and others.”

Chief Moore said that the single complaint prompted him to have a large Thin Blue Line flag taken down from the lobby.

“I directed to have the item taken down from the public lobby. The U.S. flag should be proudly displayed in our lobbies whenever possible. Memorials for our fallen are also authorized in all public spaces,” he said.

Moore continued, “it’s unfortunate that extremist groups have hijacked the use of the ‘Thin Blue Line flag’ to symbolize their undemocratic, racist, and bigoted views.”

The chief said that while the flag must be removed from being displayed in all public areas, officers can still have them in “their workspace, locker door, or personal vehicle.”

The Los Angeles Police Protective League union issued a statement about their “utter disgust” with the decision.

“It is difficult to express the level of utter disgust and disappointment with Chief Moore’s politically pandering directive to remove Thin Blue Line flags and memorials for fallen officers from all public areas within our police stations. This direction came as a result of complaints from anti-police, criminal apologists, and activists who hold too much sway over our city leaders and, unfortunately, our Chief,” the Board of directors for the Los Angeles Police Protective League wrote in a statement to the station.

The union’s statement added that they “vehemently” opposed “this disrespectful and defeatist kowtowing by our department leadership to groups that praise the killing of police officers and outright call for violence against those of us in uniform. We have directly expressed our outrage to the Chief.”

“Let’s all remember what the Thin Blue Line flag is and what it represents: ‘The Thin Blue Line flag features a black and white image of the American flag with the horizontal stripe beneath the field of white stars on the black background. The stars represent the citizenry who stand for justice and order. The darkness represents chaos and anarchy, and to many, a memorial to the law enforcement officers who have perished in the line of duty,'” the statement continued. 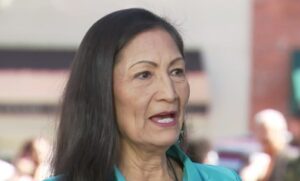